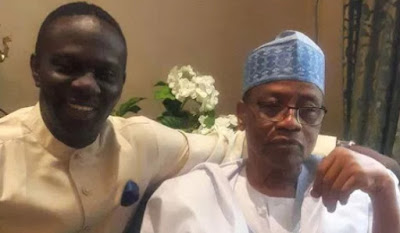 Ibrahim Badamasi Babangida, Nigeria’s self styled Military President and self confessed “Evil Genius”, is a sly character, gifted with cunning, famous for prevaricating on national issues, skillful at issuing vague and ambiguous statements, and master of doublespeak. He was at it again.

This time it is a press statement issued by his spokesperson, Prince Kassim Afegbua penultimate Sunday, in which he commented on the state of affairs in the nation and allegedly asked President Muhammadu Buhari not to seek a second term in 2019. Hours after the release of the statement, another statement allegedly emanating from the gap-toothed General was released denouncing the initial press statement issued by Afegbua.

I have read both press statements and the only difference between them is where IBB allegedly asked Buhari not to seek a second term. I must say though that in the initial statement, IBB made a subtle, veiled and indirect call on President Buhari not to contest in 2019, while in the second statement there was nothing of such.

In comparison to the press statement issued by former President Olusegun Obasanjo, calling on Buhari not to contest in 2019, IBB’s press statement lacked direct, brutally frank, concise, and precise words. He seemed to be making suggestions rather than definitive statements unlike OBJ who employed more of the latter than the former. Arguably, the difference in the choice of words is a reflection of the difference in their personalities.

Is it possible for Afegbua to release a press statement on his own without authorization from his principal? Did Babangida make a complaint to the IGP about the altering or the unauthorized release of a press statement in his name by Afegbua? On whose instruction did the Inspector General of Police (IGP) declare Afegbua wanted?

The release of a press statement by General Babangida barely two weeks after Obasanjo’s missive to Buhari, both counselling him not to seek reelection in 2019 could be indicative of something fishy. Perhaps, it is reflective of the outcome of the meeting held last year by Generals OBJ, IBB, and Abdulsalami Abubakar at Babangida’s hilltop mansion in Minna, Niger State, while Buhari was battling with his health in a London hospital.

I am really not surprised at this whole brouhaha over IBB’s press statement. He has done similar things in times past. I fear Afegbua could be the fall guy in this latest episode. I think that the time has come for Prince Kassim Afegbua to sever his relationship with a General who has manifested more of cowardice than courage in civil life. A man who cannot deliver himself from the hands of his friends. The same friends who piled pressure on him to annul the June 12,1993 Presidential Elections, Nigeria’s freest and fairest, since independence in 1960 till date. The IGP is a meddlesome interloper in this issue. It is curious that he was quick to act on Afegbua but is lethargic on the issue of killings by Fulani herdsmen.

Mothers Beware Of Valentines Day!! Do Not Allow The Devil To Truncate Your Daughters Destinies
Lawyer Warns Vulnerable Ladies Against Losing Virginity To Fornication On Valentine’s Day