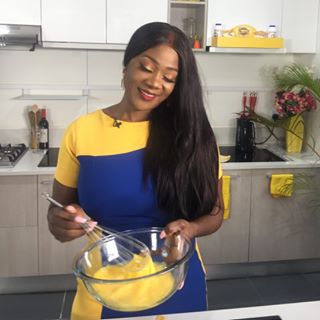 In less than 4 weeks before her 35th birthday, Nollywood actress Mercy Johnson Okojie actress has embarked on a new journey and she’s poised to make a mark with a brand new cooking show.

From brilliantly interpreting the role of a sharp babe to acting out a village truant and wealthy single lady, Mercy Johnson-Okojie has been there and done that in Nollywood.

The new challenge for the mother of three is simply known as ‘Mercy’s Menu’. A first in Nollywood but not daunting enough to make the actress underwhelmed.

In an exclusive interview with Pulse Nigeria, she said;

Mercy was quick to note that her cooking show will feature celebs and public figures.

Are your in-laws your best friends? @omawonder 😘😘 It’s sweet food but even sweeter talk on Mercy's Menu. @mercys_menu is coming to you in July👌and I can’t wait…. Where my mummies at? Let's chat and if you are more experienced, educate us biko🙈…. @mercys_menu  @mercymagiconline ❤❤