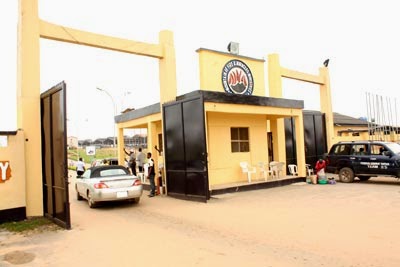 MFM church has placed a ban on women in trousers from passing through its Prayer City  in Magboro area of Ogun State Nigeria.

Women in trousers who have business in the Prayer City must henceforth show up in skirts or they will be disallowed.

The development has dimmed the hope of residents of the no fewer than 17 communities, whose access road was recently blocked, that the church may reopen the road.

The church blocked off the access road to Unity Estate, Magboro, Magada, Abule Odo and Makogi without informing the residents.

The Ibafo Police Division had intervened in a planned protest by the residents on May 17, promising that the issues involved would be resolved.

Three weeks after the DPO’s intervention, the church barred the residents from passing through its estate, which is the only access road to link the expressway.

Security operatives on Saturday told the residents that motorists will not be allowed starting from this week’s Monday due to security reasons.

Some women who were going to Ecobank inside Prayer city on Monday narrated their ordeal in the hands of the overzealous security men at the gate of the camp ground.

“See the loose trousers that I’m putting on. How does this offend anybody? You can imagine the embarrassment that I was subjected to at the gate on my way here (bank).

“They asked why I must wear trousers to this place, as if I said I was going to the church auditorium. At least, they should have waited till I want to enter the church.” – One of the women who got embarrassed told reporters.

Hear what a security head of the church who said the road is not opened to the public said:

“The so-called access road is illegal. It is part of the church property. If we decided to block it, I don’t think that is business of anybody. Can you claim what does not belong to you? They (communities) even went ahead to stage an informal protest. Attacks on public places in the country have made it mandatory for organisations to beef up their security.

“We are not under compulsion to share our property with the communities. Regarding your question on the social benefits the neighbouring residents derive from the church, I can’t comment on that. But there are records of what we have done for them,”

Women wearing trousers will be barred from taking the road on the camp that links to the expressway.”