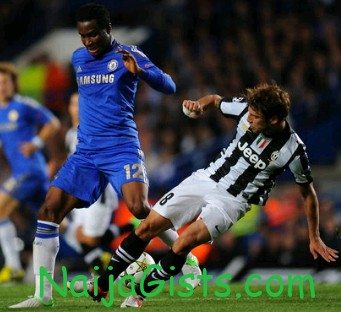 On Thursday the 20th of September, 2012, Chelsea‘s Nigerian midfielder John Mikel Obi was racially abused on twitter for costing Chelsea their highly needed victory in the Champions League’s opening match against Juventus that took place on the 19th of September, 2012. naijagists.com

Some Chelsea fans immediately took to twitter to blame Mikel for giving the ball away 10 min. before time.

At first Mikel Obi apologized to his fans for his mistake after the match.

Here is what Obi said:

‘I’m sorry about the mistake, but there are no excuses.’

Here is an official statement from Chelsea:

“We’ve been made aware of racist tweets targeted at
Mikel which are totally unacceptable, disgusting and abhorrent. We’ve informed the police and support taking the strongest possible action.”