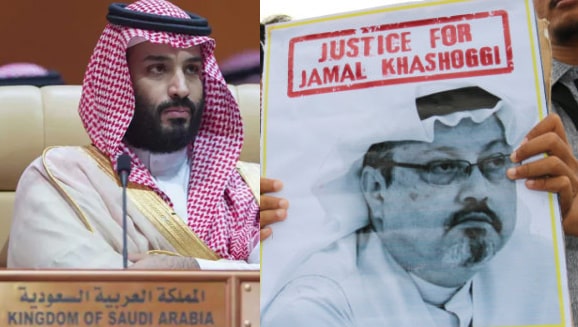 On Wednesday, Khashoggi’s final column was published posthumously by the Washington Post.

In it, a man who had resigned himself to self-imposed exile from his homeland, bemoaned the lack of freedom of expression in Arab states. “Arab governments have been given free rein to continue silencing the media at an increasing rate…they have also arrested local reporters,” he wrote.

“The Arab world is facing its own version of an Iron Curtain, imposed not by external actors but through domestic forces vying for power.”

He mentioned his “dear friend, the prominent Saudi writer Saleh al-Shehi” who “wrote one of the most famous columns ever published in the Saudi press”.

Khashoggi pointed out: “He unfortunately is now serving an unwarranted five-year prison sentence for supposed comments contrary to the Saudi establishment.”

He went on to address his concern that actions such as these “no longer carry the consequence of a backlash from the international community.

Instead, these actions may trigger condemnation quickly followed by silence.” It was just over a year ago, in September 2017, that Khashoggi wrote his first column for the Washington Post in which he revealed that he was taking himself into self-imposed exile in the US following MBS’s rise to power

Over the following months the journalist repeatedly criticised the crown prince for the direction he was taking the country.

Less than 24 hours after filing his latest insights to his American colleagues, the journalist was dead – apparently a victim of exactly the kind of oppressive state-sanctioned censorship that he had taken pains to describe.

A note from Karen Attiah, the Washington Post’s global opinions editor, prefaced his column and explained it had been received from Khashoggi’s translator the day after he was reported missing in Istanbul.

She wrote: “The Post held off publishing it because we hoped Jamal would come back to us so that he and I could edit it together. Now I have to accept: that is not going to happen. This column perfectly captures his commitment and passion for freedom in the Arab world. A freedom he apparently gave his life for.”

In his final column, Khashoggi also reveals just why the Saudi authorities may have been so concerned about his influence. He tells of his gratitude that his publication had “taken the initiative to translate many of my pieces and publish them in Arabic”.

“Arabs need to read in their own language so they can understand,” he wrote.

“The Arab world needs a modern version of the old transnational media so citizens can be informed about global events. More important, we need to provide a platform for Arab voices.”

Now – in the most appalling circumstances – one educated voice with a global reach has been permanently silenced by the very people he was seeking to enlighten.