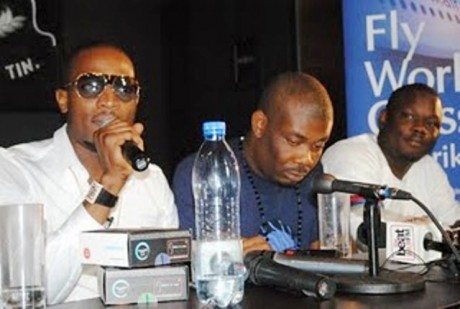 According to NET, after 9 years of business partnership, Mo’Hits bosses Michael Collins aka Don Jazzy and Dapo ‘D’banj‘ Oyebanjo may soon be ending their hitherto ‘untouchable’ partnership. naijagists.com

Multiple sources say, following protracted disagreements, both parties may have reached a mutual agreement on ending their business partnership, although they haven’t come out to say anything to the public.

Reports, including that of Nigerian daily, The Vanguard, say Don Jazzy and D’banj’s relationship has gone terribly sour, with possibility of the acclaimed producer launching another label, which will see him have full authority and sole ownership. Don Jazzy currently co-owns Mo’Hits with D’banj. The pair formed the label in London after working out of JJC’s Backbone Music in 2004.

A barrage of unanswered questions from fans have long been flocking the enigmatic producer’s page on popular micro-blogging site Twitter, but in stark contrast to his usual responsiveness, Don Jazzy has been quiet. He hasn’t tweeted since the story came to light.

Before now, the famous duo were never seen anywhere without each other, but at the time of writing this report, Don Jazzy is in Nigeria without his hitherto ever present pal D’banj, who is promoting his brand in America while he works on his forthcoming fourth album ‘Mr Endowed’.

On the other hand, we’re told the Mo’hits producer has temporarily moved into Dr. SID‘s 1004 Victoria Island apartment, where Wande Coal also resides, having deserted the multi-million Naira Lekki mansion he moved into with D’Banj in early 2011.

Insiders say this new development, if not arrested before things totally crumble, could spell the end of what’s probably the biggest music powerhouse and label ever seen in Nigeria.

HOW THE FIGHT STARTED

The now evident cracks became obvious around the time the producer who is also the President and CEO of Mo’Hits, bagged the Kanye West G.O.O.D Music deal which also influenced a $3m JV deal, with D’Banj as key beneficiary. The Kanye project catapulted both stars to a whole new pedestal in their careers, where they now rubbed shoulders with the biggest names in the international music scene. But the problems had emanated before then.

From then on, insiders say ‘D’banj’s ego, which was already causing tension within the label, only got bigger and harder to check’. Sources claim this new feeling of invincibility on the singer’s part began to make him question his continued association with his long-time friend and collaborator, who didn’t seem to be ‘representing’ on this new found wavelength.

The recent Occupy Nigeria protest also saw the acts take separate sides – while D’banj did little to save himself from accusations of collecting money from Goodluck Jonathan, Don Jazzy readily denounced the government and identifed with the people; saying, in what would become a famous tweet, that he ‘regrets voting for Goodluck Jonathan’

It appears D’banj, whose Don Jazzy produced 2005 ‘No Long Thing‘ album instantly brought him to the limelight, is uncomfortable with the continued delay in the release of his fourth studio album ‘Mr Endowed‘, which was initially supposed to be released late 2011.

Trusted sources allege that D’banj no longer remits payments from any shows he attends into the label’s general account. As one source puts it ‘he feels Don Jazzy isn’t putting the right kind of energy into the business right now’.

A Daily Times report claims D’banj is now represented by the label’s A&R – Oluseun ‘Bankulli’ Abisagboola while the other Mo’Hits acts, including Don Jazzy, are still being represented by long-time manager Sunday Are. All efforts to reach Bankulli proved abortive, and while Mr. Are picked up our phone calls, he didn’t answer our inquiries, neither did he reply our text messages asking the same questions. Don Jazzy had not responded to our emails as at the time of going to press.

As already reported, Don Jazzy has now chosen to stay with other artistes on his label, specifically putting up with Dr. Sid at the moment, leaving the Lekki Mansion deserted.

D’Banj, on the other hand, has been seen in the United States, and Paris recently, living it up with music heavyweights like Diddy, Swizz Beatz, Common and other stars who came to support his new boss, Kanye West at Paris Fashion Week. Those close to him also say he’s bought himself a home in Los Angeles where he now hopes to reside fully. He’s also reportedly building himself a new team – made up of trusted associates like Bankuli and a former Mtech boss who’s heading his business team.

One source told us: ‘The camp has definitely split up – D’banj and younger brother K Switch are shuttling to and fro the US and UK, while Dr SID (who’s had repeated spats with D’Banj in the past) and D’Prince have stuck with Don Jazzy. ‘Dr. SID feels indebted to Jazzy as he blew up his career‘.

It is uncertain where Wande Coal stands for now. And while many are already taking sides, we’re told those who understand the implications of the pending break-up, are working day and night to make sure it doesn’t happen. ‘Several people are working to make sure it’s resolved’ a top industry source told us, Saturday. ‘Friends and partners will always quarrel. I dont see anything happening between them that can not be resolved. They stand to benefit more by remaining together than if they go their separate ways…’

However, one Mo’Hits insider claims ‘sadly this thing has gone beyond repair’. He refused to elaborate.

So with the breakup of the duo looking like a reality, what lies in store for both power partners if they decide to go their separate ways? NET examines the possible scenarios.

This music maverick’s career is not likely to be over, at least not in the foreseeable future. With increasing international exposure opening doors for him from London to New York, multi-million dollar deals begging for his star endorsement, close associations with the biggest names in musical entertainment; Snoop Dogg, Kanye West, Jay Z and more, there is little evidence to support the notion that a split will stop his career in its’ tracks.

However, ‘breaking free’ from his long-time producer and friend, if not properly managed, may mark the beginning of a long and painful journey into a reckless and irresponsible lifestyle, culminating into personal and career decline.

The producer is in no danger of being out of relevance musically, since his G.O.O.D music deal will no doubt task him on bringing out more creative material fit for his new family’s primarily American audience, thereby boosting his profile. His ever building clientele also doesn’t seem to be much threatened, as even now, he commands some of the highest production fees in the continent.

However, his visibility in the media may suffer, thereby confining him permanently to the booth. The combined force of Wande Coal, Dr. Sid, D’Prince and possibly K-Switch, taking nothing away from their commercial viability and talent, don’t seem enough to ensure his visual presence, at least not like his Don Jazzy/D’Banj duo formular. One good thing for him though: Don Jazzy is a star maker who can pick up another talent and create a star in the mould of D’banj in a few years. He also appears to be a more disciplined act; and in showbusiness, with discipline comes focus and longevity…(NET)