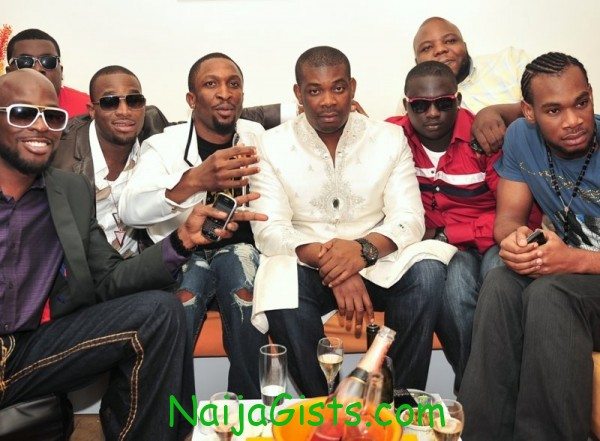 Saturday March 17, 2012 would have been remembered in Nigeria for the sweltering heat until a certain ace producer got on Twitter. naijagists.com

In a series of obviously belabored tweets, the one-time CEO of Mo’Hits records Don Jazzy validated all the rumors that had been flying around about his split with erstwhile partner D’banj, finally bringing to an end what a lot could easily term the most dynamic partnership contemporary Nigerian music has ever witnessed.

Already a lot of accusatory fingers have been pointed to what could have triggered the split: some tenable – a Kanye West-G.O.O.D Music deal hemorrhaging already bloated egos and increasing the bad blood, others laughable and a little far-fetched – talk of ‘juju’ and rappers hexing Don Jazzy after a Hip-hop World interview where the good don had some rather unsavory things to say about the state of rap music in Nigeria.

Over the next couple of weeks, music columnists, conspiracy theorists, and others alike are sure to have a field day as they give reasons to why a seemingly symbiotic relationship went to the pits as well as proffer directions as to the next steps for the duo and the Mo’hits label home to Dr SID, Wande Coal, D’Prince and K-switch, their collective and singular futures keenly debated as a matter of life and death and the after-life.

Hours after the ‘twitclaration’, Don Jazzy and D’banj were already trending as separate entities; with the imprint they started already taking the first steps towards full blown relegation to the backgrounds of our memories. Whilst this might be in the spirit of the trending topic, a step back might be needed to remember Mo’hits for what it was and why, regardless of their separation now, their names will forever be intertwined when talk of this epoch of Nigerian music comes up.

In an era where even divinely sanctioned unions don’t last forever, D’banj and Don Jazzy have been able to put a lot into a mere decade. What started out as two young men relocating from England with a bunch of songs and a lot of dreams has turned into a cultural behemoth touching on a lot besides music. With Don Jazzy’s sonic direction and D’banj’s electric personality they jointly impacted us in ways that we hadn’t felt in a while or even known to be humanly possible before them.

They had us dancing to their infectious songs – some of us going as far as imitating the phallic hand move made famous by D’banj. They flexed urban lingo to include koko and all its derivatives, made ‘oseee’standard form of response to good news and took endowed from the annals of conversational obscurity and made it common speak.

When it came to performances they equally blazed trails, either shocking us a la a young D’banj strutting his stuff on the stage an the inaugural edition of the Hiphopworld awards in nothing more than a towel – only outdone in audacity by his ambush of the red carpet earlier on with 50-plus kokolettes; or leaving us in sheer awe as to how they pulled it off – live performances that had a mish mash of atilogwu and salsa dancers and what else they could bring on stage as a band gave remix renditions of already hit songs

In business their mark was also felt as they gained an enviable position as Nigeria’s foremost record label churning hit album after hit album, even going on further by trying alternative models to Alaba distribution (the Funk You Up and Mo’hits compilation album – C.V). Not to forget the Koko brand extensions from reality shows to phones, the international collaborations, the Oliver viral video campaign, the corporate endorsements to the eventual G.O.O.D Music deal that many feel broke their union.

Don Jazzy in tweeting about the split also announced that he would be giving away the proceeds of his production catalogue to five charity organizations. Whoever the recipients turn out to be, they are sure to be smiling to the bank. But somehow they won’t still be able to lay exclusive rights to that as we all have been benefactors of the Mo’hits legacy – their story and their rise showing what two people can do with the right amount of resilience, talent and passion.

That it has now come to an end doesn’t taint it for what it is. After all what is that popular saying about all good things (no pun intended)?
In the midst of all the controversy and eventual spilt between pop star D’banj and label partner Don Jazzy, it looks like the former is already moving on with his career with the release of the much anticipated ‘Oliver’ video. (NET)

Quote Of The Day: Never Explain Yourself To Anyone
Singer Davido Lavishes N2 Million On Necklace