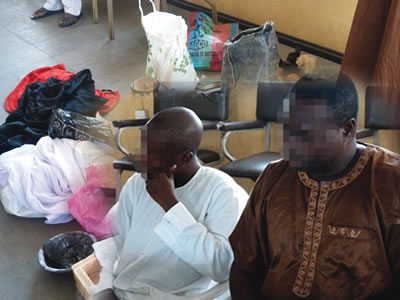 Two Islamic clerics identified as Lateef Ahmed & Fatai Bamidele were recently arrested by the Special Fraud Unit of the Nigerian Police for falsely obtaining the total sum of 30 Million Naira from a Lagos based business man, Lawal Sulaiman.

According to police sources, the suspects took N30 million from Sulaiman with a promise to perform ritual that will make him more popular and wealthy.

Sulaiman said he was hypnotized and held in captivity for three months by Ahmed in Kwara State.

He denied approaching the clerics for money ritual, saying he only sought protection from evil forces.

He said, “I supply fireworks and Bamidele’s shop is very close to mine. I’ve known him for years and I trusted him to the extent that I discuss my personal problems with him.

“One day, he told me that he had a bad dream about me and that I would need special prayers. He said I would need to buy a ram and 40 Qurans for 40 Imams who would pray over the matter. I paid N125, 000 into his bank account to facilitate it.

“After the prayers, he said a superior Imam in Kwara State needed me to come down to Ilorin to eat the heart of the ram. Initially, I was reluctant but he told me it was a matter of life and death. So, I went.”

The 31-year-old victim said when he arrived Ilorin, he met Ahmed who gave him the heart of the ram to eat.

He said after eating it, Ahmed showed him some charms and objects and told him to keep what transpired between them secret.

Sulaiman said, “After I ate the ram’s heart, Ahmed showed me the charms and other objects. I lost my senses

Sulaiman said when he became broke, he complained to Bamidele about his finances but he advised him to return to Ilorin and talk to Ahmed.

Sulaiman said, “On getting to Ahmed’s place, I remained there for three months. He kept on controlling me and I wasn’t myself. Sometimes, he would put my phone on private number and tell me to call my relatives and tell them not to look for me as I was abroad.

“He continued to extort money from me until one day when he told me to go back to Lagos to bring more money. When I returned to Lagos, I became myself. I called the two suspects, recorded our conversations and then reported to the police.”

The suspects however said they collected N10m from Sulaiman and not N30m.

Ahmed, 45, said, “Sulaiman told me he wanted to be rich and wanted his creditors to forget his debts.

“I informed him that there are two types of money rituals. There’s the one that a ghost will bring money at once and there’s another one that he will be getting the money daily. Sulaiman said he wanted the latter and gave me N10m as a gift.

“I did not abduct him. He was hiding because he said he owed people. The ritual takes a year to perform and it would have ended in October if not for my arrest.”

Bamidele, who accused Sulaiman of greed, said his share of the money was N2.5m.

“After I did the first set of prayers for him, he said he wanted to become very rich. That was when I referred him to Ahmed. Nobody defrauded him. It was all a gift,” he said.

The Commissioner of Police for the command, Mr. Ayotunde Ogunsakin, who confirmed the incident, said the suspects used the money to buy expensive cars and renovate Ahmed’s building in Ilorin.

He said, “During investigations, it was discovered that out of the N10m, Ahmed gave Bamidele N2.5m while he kept N7.5m.

“Bamidele bought a Nissan Infinity Sports Utility at N1m, while his accomplice bought a Ford SUV at N1.4m and used the remainder to renovate his house. They will soon be charged to court.”

Ogunsakin added that one of Sulaiman’s creditors had written a petition to the SFU.

“The petitioner alleged that Sulaiman collected goods worth N13.2m but had not paid him since October 11, 2011,” he said.(punchng)

Question Of The Day

If you have watched several Nigerian movies, you must have developed the believe that money rituals do have some dangerous consequences.

Knowing the full consequences of their actions, why do people still go ahead and perform money rituals?