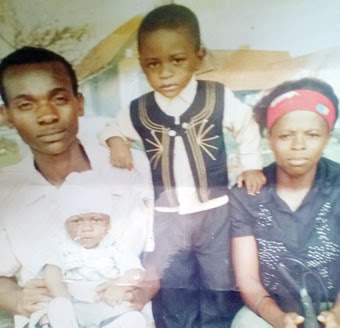 The dead body of a 28-year-old pregnant woman, Justina Joshua, which was left to rot in the mortuary of the General Hospital in Idanre, Ondo State due to a clash of cultures, has been mutilated while laying on the floor of the mortuary.

According to a previous report by PUNCH , Justina, who hailed from Akwa Ibom State, died moments after she was knocked down by a tree while on the farm to pluck corn in the company of her six-year-old nephew.

Justina, who had three children with her husband, Sunday, made it to a clinic but when she was being transferred to the general hospital for better care, she died at the gate of the hospital, ostensibly due to the complications she suffered from the incident, having been trapped under the tree for hours.

The Idanre community had insisted that she must be buried beside the tree, in line with their custom, while the relatives of the deceased, also insisted that their own custom demands that Justina’s corpse should be taken home for proper burial.

The Commissioner of Police in Ondo State, Hilda Harrison, intervened in the matter, which led to the release of the corpse by the community, and the case was transferred to the State Investigation Bureau in Akure, the state capital.

Already, the tree cutter, Seun Oke, and the owner of the farm, Awute Aye, have been arrested by the police and they would soon be charged to court, but when the corpse was to be moved from Idanre mortuary to the one in Akure, the state capital, it was discovered that Justina’s body had been mutilated for reasons yet to be ascertained.

The Ondo State Director, Legal Aid Council of Nigeria, Kubiat Ikpidungise, who first raised the alarm, told our correspondent that by the time they got to the mortuary, the “near decomposed corpse”, had been mutilated, while maggots were already coming out from some parts of the body.
She noted that a gapind hole was on the left leg that looks like a deep cut. She said the explanation provided was that a rat must have eaten those parts while she was kept on the floor.

Ikpidungise wondered how the body was mutilated if indeed it was being checked every three days, “as claimed by some elders in the community. What then was the essence of checking the corpse every three days if it was already decomposing and some parts of it removed?” she queried.

“The sight is pathetic, and we need an explanation on this from the medical director and mortuary attendant at Idanre because the family cannot accept such corpse.
The trip to Ukwok village is close to 12 hours, and with the state the corpse is, it will be so embarrassing by the time it arrives. We told them among other things that the autopsy should be carried out and the corpse should be embalmed for at least two weeks to put it in proper shape for the long journey to her village,” she said.

Efforts to reach Sunday, the husband of the deceased, were not successful, as he was said to have been inconsolable since seeing the state of his later wife’s body.

Meanwhile, the spokesperson for the Ondo State Police Command, Femi Joseph, said the command had reports that the body was mutilated, saying investigation had commenced into the matter. He assured that justice would be done.