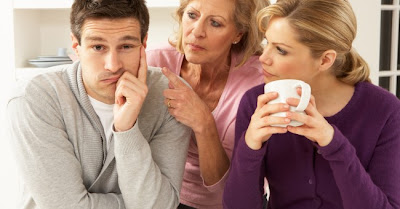 Mrs Florence ltianu has pleaded with a Lagos Grade ‘A’ Customary Court, sitting in Agege, to dissolve her 12-year-old marriage over battery, threat to life and lack of care.

The 48-year-old woman, resident at 4, Kaka Street, Agege, told the court that her marriage had never been peaceful.

But the defendant in the case, Donatus, said his mother-in-law turned herself into his wife in his house, saying that was the beginning of his crisis.

“I know I married two women, mother and daughter”, the husband said.

“The first four years of my marriage was sweet, but trouble began when my second wife (mother-in-law) started living in my house.” According to the wife: “I have been managing the marriage. I have been smiling outside and shedding secret tears, all because I don’t want to leave my husband because of my children.”

She continued: “Since the inception of the marriage, I have been the head of the home because my husband is so stingy and won’t part with any money unless it is stolen from him. ”I have been responsible for the house rent, feeding, children school fees and other expenses in the house. ”

All my husband does is to sit down early in the morning and be expecting food to walk in on its own to his table. ”I would not have thought of leaving him if not for the beating I do receive from him. ”He beats me any time he asks for money and I refuse, he nags and complains a lot, he talks like the parrot and has been threatening to kill me. ”I know him.

Whenever he is angry, he can misbehave and would not mind the consequence. I want to live for my children. ”I am fed up. I have heard a lot of stories of husbands killing their wives, I do not want to fall a victim.” She told the court not give room for reconciliation “because it cannot work.”

Florence urged the court to dissolve the marriage and grant her custody of the children. Donatus denied the allegations. He told the court that his mother-in-law had been the source of the crisis in his home. ”I am a gentle man, I love my wife and kids, but my problem is my mother-in-law who controls my home”, he said.

”My mother-in-law has been staying with us for the past eight years, you will know what I would have gone through in that house. ”Mama controls all the activities in the house. She tells my wife what to do, she gives instructions in the house as if she owns the house. ”Some times in the night, I will wait for my wife to join me on the bed till around 12 mid night and if I don’t see her, I will sleep off.

”The next day if I ask her what she was doing in the sitting room that kept her so long, she simply would tell me that she was in a meeting with her mother.

”I know I married two women, mother and daughter. ”How will I be happy with the happenings in my home? I ventured into some business but my wife and mother ruined it.

”The first four years of my marriage was sweet, but trouble began when my second wife came(my mother-in-law), started living in my house.”The 52 year- old- man told the court that he was ready to be responsible if his mother-in-law left the house for them.

The court asked the respondent to improve his relationship with his wife and see if the situation will change, while Florence should bring her mother at the adjourned date, January 29, 2013, for further hearing of the case. (Vanguardngr Report)