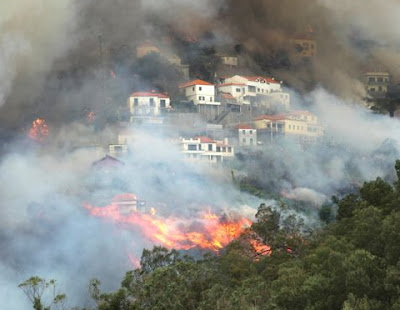 Heavy rainfall that fell overnight in the region and a lowering of unseasonably high temperatures in Galicia helped the task of the hundreds of firemen and military personnel working to extinguish the flames.

The Northwest Spanish Community of Galicia and the neighbouring region of Asturias are slowly returning to normal after over 150 wildfires caused widespread destruction and claimed four lives over the past three days.

On Tuesday the Galician regional government confirmed that 50 fire points were still active.

The council also maintained a level two alert given the proximity of seven fires to the cities of Ourense and Lugo.

Health authorities confirmed four people remain in hospital as a result of the various fires, while 30 more required medical attention.

Although investigations into the causes of the fires are still at an early stage, Civil Guards say there are indications that the majority of them were started intentionally.

Around 145 different fires began over a very short period of time over the weekend and regional leader Alberto Feijoo said that the fires were the result of “incendiary terrorism with the intention of causing the most damage where it would cause the greatest impact.’’

Meanwhile, 11 fires out of the original 36 are still active in Asturias, with nine of them under control.