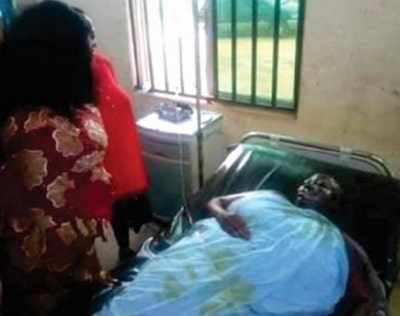 By Yetunde Oladeinde, The Nation

The unfortunate trend of partners killing their spouses is on the increase. One trend that however seems to have abated overtime is that of disgruntled partners bathing those they once cherished or promised to love till death do them apart with acid. But that was the lot of Anulika, a mother of two, who was recently assaulted with the destructive liquid by her husband.

SHE is the exact image you don’t want to behold. Her face – or what it has become, courtesy of her vicious husband – is the type you wouldn’t even wish for your worst enemy. If only she knew a union with him would end this way….

But when Anulika Fidelia Onyeachonam met her husband, Peter Onyeachonam Chinwuba, it was like a dream come true. The young man fitted into her definition of ‘dream man’ and happily they tied the knot after a brief courtship. They both looked forward to a blissful life together, forever after.

Yes, it was. And gradually the union produced their first child, a boy and later the second, a girl. “We lived happily together, even though he was a civil servant. I was happy and thank God that everything was working as planned,’ Anulika recalls.

Unfortunately, the dream for a happy married life together was short-lived. “Something I never imagined happened and that made me to change my mind about the marriage. I couldn’t believe it would ever happen to me. My husband defiled our only daughter and I made up my mind that it was over.”

Did he object to her decision to call it quit?

“Not at all. Instead he decided to take the laws into his hands,” Annuli says amidst sobs. Gradually, she found her voice again and continued her sad story.

“It is such a sad story and I can’t really believe that this is happening to me at all. The disaster happened in the afternoon of April 17, 2019. On that fateful day, I told him that it was over between us and that I was no longer interested in the marriage. We were both at the Welfare Department where they granted him custody of our two children.”

“One is four years plus going to five years and the other is just three years old. I was told that since the children were below six years, they were going to give them to him. I accepted and said that the decision was okay and we left the welfare office. My husband was with his sister and they left hurriedly.”

End of the road and Anulika’s heart was in disarray. What does life hold for her in the next few weeks, months and years – especially without her children, her sources of joy?

Suddenly something happened. Something she never expected from a man with whom she had lived for years as man and wife.

“As I was walking outside the welfare office, I saw my husband running towards me with his sister. Initially, I thought he wanted to start another fight with me, but before I knew what was going on, he had poured a liquid substance, which turned out to be acid all over me.

“I was in total pains. My husband and his sister immediately turned and made to run away. Luckily the security men at the scene ran after them. They arrested my husband and took him to the police division in Awka.”

His sister however escaped and has not been seen since then. “I was taken to the government teaching hospital in Awka, where they have been treating me. Naturally, my people were devastated when they saw the extent of the damage.”

“My husband is still in Police custody as we speak. But that is not enough, because he has ruined my life and I want justice. He raped his two-year-old daughter! Naturally, I was very angry with him. When I challenged him, he threatened that he was going to kill me. That was why I left the house and ran away from home. Now I know that he really meant to kill me.”

Was he like this at the beginning of the marriage?

“No, he wasn’t like this at the beginning. He was a civil servant and I never imagined that he could do such a thing to me. But I thank God that I am alive. I believe that once there is life, there is hope.”

Anulika’s family is hard hit by the development and they are asking for justice. Hardest hit is Anulika’s mum, Rose Ogugua. It’s been tears galore since the day she heard the bad news.

“Na so we see am ooo”, was all she could muster, amidst sighs and hisses. “This man wants to destroy my daughter. I just don’t know what to say at all. Is this how people repay good for evil He has messed up the life of my precious daughter.”

Asked if she had any premonition that the marriage would end this way, the old woman answers this way: “No, not at all. We liked him at the beginning and gave him the support required as a family. But now, we don’t like him anymore. How can you like someone who treated your daughter this way,” she asked rhetorically.

“Let his people go and treat my daughter. She is in a real bad state and I hate to imagine that all this is happening to her. I also plead with the government to come to our aid; my daughter needs care and attention to survive this ordeal. Unfortunately, we don’t know anybody, and we don’t have money.”

The victim’s cousin, Uche Okanimee captures the gory incident this way: “The magistrate court behind Nigerian Prisons, Awka sat on April 29th. The accused person through his lawyers asked for bail but it wasn’t granted. The case has been adjourned to June 18th 2019. A very surprising thing happened in the hospital where my cousin is being hospitalised. While court was sitting, the DCO came to the hospital and forcefully took another photograph of the victim. Her brother who was in the court confirmed that at no point during the court sitting was there any instruction to get another photograph of the victim. Then they are now denying going to Amaku General Hospital to take the photographs. We are worried about the safety of the victim, her life is very important to us.”

“It is a very sad occurrence and I still can’t believe that he could do such a thing. I usually read about such things and now that it has happened to someone close to me, it is so shocking. For me, the life of the victim is our concern; you can imagine the pain that she is going through at the moment. It is both physical and emotional pain.