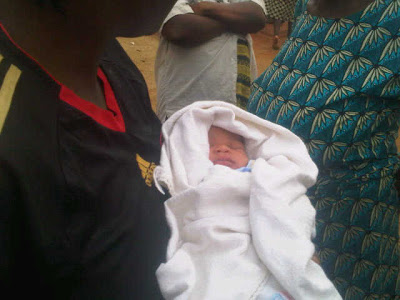 A newborn baby who was found abandoned in a bush very close to Gboko General Hospital in Benue state has been rescued by the police.

The Police Public Relations Officer (PPRO), DSP Daniel Ezeala, confirmed the recovery to the News Agency of Nigeria (NAN) in Makurdi on Friday.

Ezeala said that the child was picked up by a `Good Samaritan’ and handed it over to the police.

“This baby was found around 3 a.m. today in a bush near the hospital by a passer-by who heard it crying and went for its rescue.

“The police swung into action immediately and arrested the mother of the child who gave her name as Seember Akase,’’ Ezeala said.

The spokesman said that the suspect was still in police custody, and advised parents to be watchful over their children to prevent them from contravening the law.

He said that investigation into the matter was ongoing and the suspect would be charged to court as soon as investigations were over.

What a wicked mother!