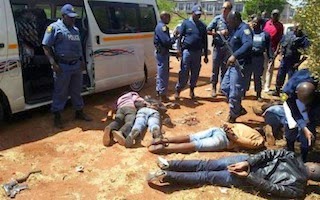 South African police said some goods stolen during a recent mall robberies in Gauteng and the Western Cape have been traced to Nigeria.

According to Eyewitness News, malls and shopping centres across South Africa continue to come under attack from criminals with the two provinces the hardest hit.

Last week, at least four malls were hit in less than 24-hours in the two provinces.

In most of these robberies cellphone shops and jewellery stores have been targeted.

Police spokesman Solomon Makgale says a task team has been set up to investigate the attacks.

“With the help of all the service provides, including Vodacom, MTN, Telkom, we were able to establish that once the phones have been stolen they are then activated in various countries, but majority of the activations have taken place in Nigeria.”

Meanwhile, police have revealed that they are set to release a list of affected areas, arrests and prevention strategies.

Following the arrest of seven people in Gauteng last week, officials say they confident they will apprehend more suspects.

Police say while the robbers do not appear to part of a larger syndicate, many seem to share common members.