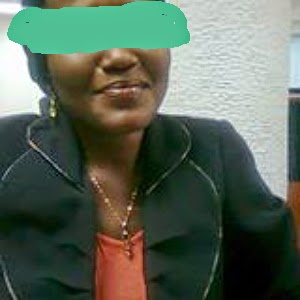 Pictured above is 35-year-old Clara Opeyemi Opetuga, a banker in Lagos who was recently arrested for withdrawing N875,000 from a dead customer account without the bank’s approval.

Opetuga, who was working at the Alausa branch of Skype bank in Lagos, was arrested by the police at the Bar Beach Division, Victoria Island, Lagos, where the bank management reported the alleged fraud.

After investigation by the police team led by Inspector Dorcas Dangbi, the suspect was arraigned in court on a four-count charge of felony to wit, stealing.

The police prosecutor, Sgt. Ingobo Emby, told the court that the accused and others now at large committed the offence between 23, 27 and 27 May, 2014 at the Alausa branch of the bank.

Emby alleged that Opetuga forged the signature of the deceased, Ayinla Adeoba Awojobi, and withdrew the money from his account without the consent of his family.

He said the accused allegedly perfected the act after she reactivated the deceased’s account, removed his picture and replaced it with her brother’s picture.

The police prosecutor said nemesis caught up with Opetuga when her employers audited the accounts of the branch of the bank and discovered the fraud.

Emyby said the bank management sacked Opetuga and handed her over to the police.

She has been taken to Kirikiri prisons in Apapa pending the time she will fulfill her bail conditions.

The matter has been adjourned till October 29 for hearing.