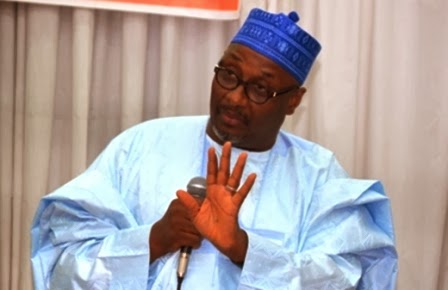 The ruling party is like to lose its National Chairman Adamu Muazu anytime from now as he’s planning to resign.

There was speculation that Mu’azu and other northern leaders in the PDP were no longer comfortable with the way Femi Fani-Kayode, Patience Jonathan, Governor Ayo Fayose and a few party leaders were denigrating the Presidential candidate of the All Progressives Congress, APC, Gen. Muhamadu Buhari.

PDP’s hate campaigns spearheaded by Patience Jonathan who described Buhari as being ‘brain dead’ and that those who shout change should be stoned, Fayose saying Buhari would soon die, and Fani-Kayode hauling all forms of invectives at Buhari and other APC leaders, were said to have irked Mu’azu so much that he threatened to resign as chairman of the party.

Sources said Mu’azu’s resignation two weeks to the presidential election may spell doom for the party. So everything is being done to prevent that from happening.

Our sources said the days ahead will be very dicey for PDP as the party’s leaders and Aso Rocks seek all avenues to mend the cracks resulting from the hostile campaigns being run by the PDP against Buhari and other APC leaders.

Continue Reading
You may also like...
Related Topics:muazu, pdp