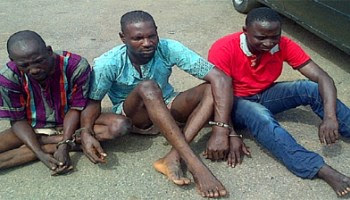 The ritualists: Alfa Babatunde Kareem, 37, Taofeek Bello, 22, and Adebayo Yusuf, 23 claimed that they got the human parts at a cemetery in Ogbomosho explaining that they went to a cemetery, exhumed two bodies and cut the needed parts for money rituals.

Speaking to the newsmen, the ritualists admitted that they committed the crime saying;

“We went to Isale General at Ogbomoso to exhume the bodies around 8pm. When we were coming, two boys accosted us on the road and demanded to know what was in our bag that was bringing offensive odour.

“We tried our best to deceive them but they were insistent. They said they will not allow us to go until we allow them to see what was in our bag. Eventually, they got the bag from us and opened it. On seeing the human parts, they raised the alarm and that was how we were arrested”.

The suspects who claimed that was the first time they would be involved in such an act further said,

“We wanted to use the parts for money rituals. If we had succeeded in taking them to our place, we would have dried and burnt them”.

Oyo State Commissioner of Police, Mr Abiodun Odude said that all the suspects would soon be arraigned in the court of law.