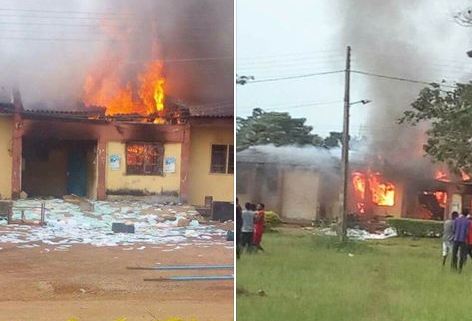 The management of Ado Poly (Federal Polytechnic Ado Ekiti) has ordered students to pay N20,000 reparation fro for the properties vandalised by some students during a riot that happened at the institution in October.

Preparation fee of N20,000 has been charged each student of the Federal Polytechnic, Ado-Ekiti (ADO POLY), as a condition for assessment returning to school. The campus was shut last month following a rampage by students, who were protesting the death of their colleague, Oluwafemi Vincent Taiwo, in the school’s clinic.

The rioters burnt down the clinic and smashed windshields of vehicles. They also looted eggs and chickens from the school’s poultry.

The management set up an administrative panel to investigate the immediate cause of the violence. The Governing Council also set up an investigative panel of inquiry into the riot.

This prompted the school to take a unanimous decision and recommend a reparation fee of N20,000 for each student.

Mixed reactions trailed the fee’s introduction. While some students rejected the fee, The Nation gathered that majority of students complied with the directive and paid the money online.

Students who paid took the payment evidence, sworn affidavit and letter of indemnity to the school in order to be cleared for resumption.

It was learnt that an interim report detailing the names of the violence perpetrators was submitted to the Council. The indicted students, it was gathered, will be made to face the Students’ Disciplinary Committee. The Director of Academic Affairs, George Oyawoye, said: “We hope to identify the perpetrators and give them fair hearing. If need be, those involved in criminal activities will be handed over to the police.”

A source in the management told The Nation that the school would fix the property destroyed immediately. It was gathered that plans were being made to create a temporary health facility to enable members of the polytechnic community have access to medical care. A building has been identified to serve as temporary Health Centre.

“As soon as students pay the reparation fees, we will intensify efforts to restore the destroyed facilities because the polytechnic cannot operate without Health Centre,” the source said.

Students have been reacting to the payment of the reparation fee. Bridget Ikponwosa, a Higher National Diploma (HND) 1 student, said he did not join the violent protest, saying it would be unfair on him to be made to pay the money.

He said: “What pains me most about the N20,000 reparation fee was that, I was nowhere near the campus on that day of the incident. Now, I am being made to pay for a sin I never committed. I have relocated to an off-campus residence with a friend and I have already called my parents who promised to send the money next week. I think it is unfair.”

Segun Ayegbusi, another HND student, said: “The destruction of the school property by students is condemnable, but the management is not fair to have imposed N20,000 on each of us. I have not even fully paid my school fees; I am asked to be paying the reparation fee.”

Favour Adumati said his civil servant parents had not been paid salaries by the state government. “What worries me the most is that, examination has been scheduled to start on November 27 and we have been running around to get the money.”

Iyanuoluwa Ogunsola, another student, described the fee as “exorbitant”, saying: “We have no reason not to pay the money. I strongly disagree with tying it to registration for examination because I am afraid, it is not all students that will pay before examination starts.”