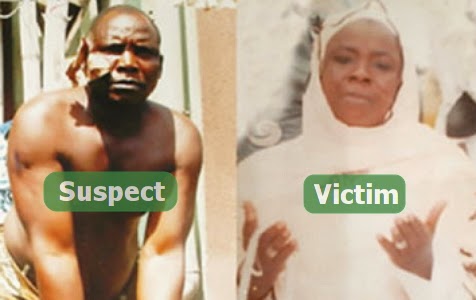 A Lagos-based Muslim cleric identified as Isiaka Akanbi has been arrested over the death of one of his customers, Raliatu Kareem.

Akanbi popularly called Alfa has a traditional healing center on Lawani Street in Olodi Apapa Lagos where he produces favour charms for traders.

62-year-old Raliatu Kareem was said to have visited him on Sunday the 26th of October 2014 before she went missing.

The cleric was promptly arrested in connection to her disappearance.

Isiaka told police he didn’t kill her. He alleged that Raliatu slumped at his home but he rushed her to the hospital where she was pronounced dead.

“On the evening of October 26, it is true that she visited me. We have been very good friends too. On that day, she just collapsed and became unconscious. I quickly rushed her to a nearby hospital, but I was shocked when the nurses told me she had died.

“I got a NAPEP tricycle and took her corpse to the Marine Bridge that same night and abandoned it there. I did not want people to trace her corpse to me. When I got home, I buried her wallet, handset, bangle and ring behind my house.

“I did not kill her. I am an Alfa, I do favour charms for traders. I met Raliatu in 1986. Since then, we have been family friends. She used to come to my place for consultation and I had been to her house too.”

The corpse of the deceased is yet to be located.

Isiaka’s case has been transferred to SCID in Yaba for further investigation.