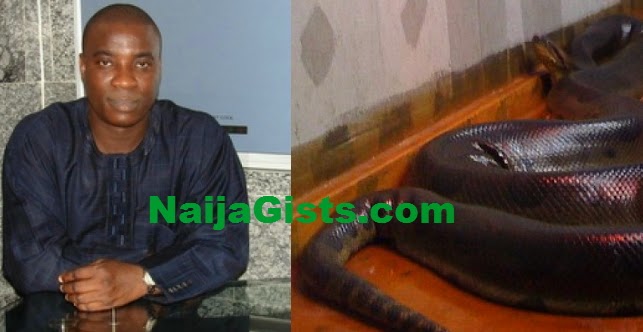 The singer in a recent chat said he has two large Python Snakes, crocodiles, eagles and many other animals he uses to get in touch with nature.

“I have my snakes and crocodiles. I have two water pythons. They are very big. I love them. They are not dangerous. Nothing really triggered my love for these animals. I just love them. I have eagles; I have ostriches and other animals. They are a good company especially when I want to think.They eat good food. They eat frogs and toads. They also eat fish.” – Kwam 1 said in a recent interview

These animals are currently being kept in his mansion in Ijebu Ode.

I hear he hired several people to look after them and anytime he wants to get personal with them, nobody is allowed in not even the keepers.

Water Pythons are non venomous snakes but they are very dangerous. They can swallow humans or crocodiles alive.