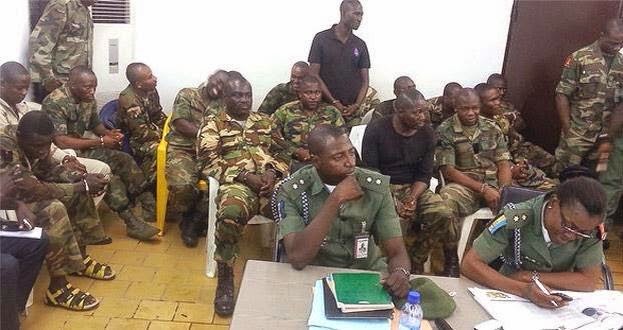 The General Court Martial(GCM) set up by Army authorities to try some of its erring officers and sol­diers for offences committed in its operation in the North East have sentenced 54 soldiers to death by firing squad.

The court has also discharged and acquitted five others. The GCM, headed by Brigadier-General M.S. Yusuf as president and Lt-Colonel Ukpe Ukpe, as Judge Advocate, passed the sentences on 59 soldiers for the offences of mutiny and conspiracy to commit mutiny.

Daily Sun gathered that before passing the judgement on the soldiers, the Chief of Army Staff, held a marathon meeting with Principal Staff Offcers (PSO), and other top Army officers at the Army Headquar­ters Abuja, which lasted over seven hours.

Although details of the meeting were sketchy, sources said the parley also delib­erated on the ongoing court martial.

The Army had set up the GCM on October, 15, 2014, to try 97 officers and soldiers for offences committed in the North East operations against insurgency.

Those facing the GCM, include four Lieutenant-Colonels, one Major, four Captains, five Lieutenants, one 2/Lieuten­ant and one Warrant Officer.

Others are one Sergeant, 24, Corpo­rals, 52 Privates, one Trooper, 67, of the soldiers are being defended by human rights activist and lawyer, Mr Femi Falana(SAN).

The judgement, is however, subject to confirmation by the Army Council, which has the President and Commander-in-Chief of the Armed Forces, President Goodluck Jonathan as Chairman and the Minister of Defence, Chef of Army Staff Lt. Gen. Minimah, Military Secretary and other top Army officers as members.