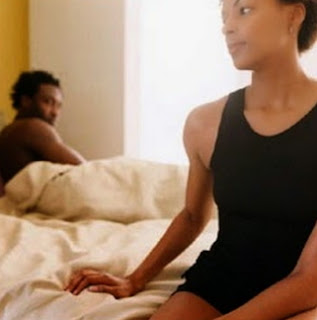 53-year-old civil servant Azeez Ige, had approached the court seeking to dissolve his marriage, on the grounds that the wife had starved him of sex since 2012.

“My wife is starving me of sex, whenever I wanted to make love to her she always fights me and my body is not a stone nor firewood.” he said.

He also told the court that his wife was fetish, a drunk, and had once tried to strangle him, adding, “she held my neck and wanted to kill me but God saved me.”.

According to him, Bola consumes excessive alcohol and misbehaves afterwards.

He added that the woman was in the habit of leaving her matrimonial home for up to a month without permission.

“Whenever I question her she fights me. She always engages herself in a physical combat even with our son’s teachers when she goes there.

“And she always fights me with knife, cutlass but will quickly rush to the police station to report and get me arrested.” he said.

Bola, a 44-year old businesswoman, however, attributed her refusal to have sex with her husband to her fear of getting pregnant.

“I denied my husband sex since 2012 because of my health condition. I gave birth to our only 10-year-old son through operation and I don’t want to experience such again.”

Bola accused the husband of beating her frequently, a situation which made her to severally move out of their matrimonial home, to save her life.