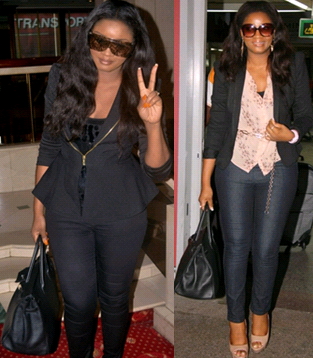 Omotola Jalade said and we quote “I can stop my reality TV show anytime, my life is very boring”

Few days back, a fan blast Omotola Jalade of staging a fake reality TV show and the actress replied with a very frustrating message that reads;

“My Show fake?Hahaha…. U could not recognize what fake is if it starred you hard in the face and punched you! #sangostriketheirteeth”

In a pre-show interview granted to PM news few weeks back, Nigerian actress and Omotola The Real me reality talk show host claim she initially tried to turn down the offer because it might become unbearable for her later on.

In the interview, Omotola explained that she didn’t look very pleased to do the show initially given that unknown to millions of her fans, behind that glamorous lifestyle in the media and red carpet drama they see, is a boring life that has started giving her concerns until the producers surfaced with the proposals for the reality show.

Hear Omotola in her own words below:

I’m actually worried that my life is becoming boring. It looked very interesting whenever I stepped out there on the red carpet, but the truth of the matter is that I don’t even go out. When I am done with my work, I go home. My life is very boring, but the producers say that is what they want. They want to showcase how exactly it has been that boring. They want people to see how boring my life is. So, it is a gamble. I am just taking a chance. But I can opt out of the show anytime I want. I think that’s the beauty of it. I signed a contract that if it is getting unbearable for me and my family, I can opt out of it if I want too,”.

All of the above point to the fact that Omotola Jalade might have been forced to do what she is not talented to do.

Do you think Omotola Jalade is acting fake in her new reality TV show?