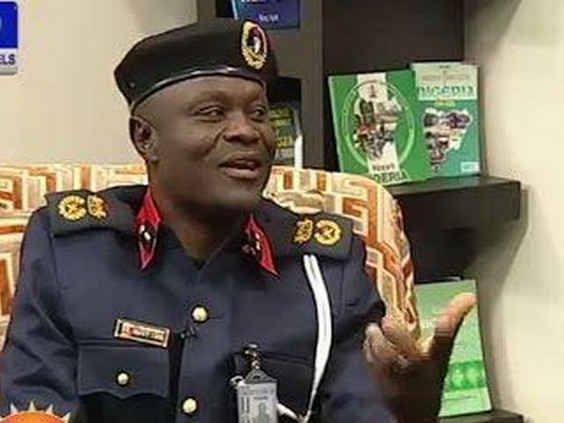 …….My Oga At the top secretly sacked; New commandant replaces him

He has been replaced with Adesuyi Clement Dayo as the new commandant of the NSCDC.

As we can recall, Obafaiye Shem started the Oga at the top saga that went viral all over the net few weeks ago.

As at the time of this report, T-shirts and movies have been produced to further ignite the oga at the top controversy.

During an interview over the weekend, Dr Olu Abolurin, the General Commandant of NSCDC introduced the new commandant for NSCDC to newsmen.

According to him, Obafaiye Shem has been removed as the current commandant of Lagos chapter of NSCDC. He was replaced by Mr Adesuyi Clement from Oyo State command.

Full details of My Oga at the top’s sack was not revealed but sources revealed that Clement Adesuyi became the new Commandant last week Tuesday.

The Oga at the top saga started during an interview the former NSCDC commandant granted on Channels TV morning program.

He messed up as he couldn’t recall the website of his organization.

According to inside sources, Obafaiye Shem was initially suspended for the TV goof however, his sack has been ordered by the Minister of Interior, the man who supervises the Nigeria Security and Civil Defense Corps.