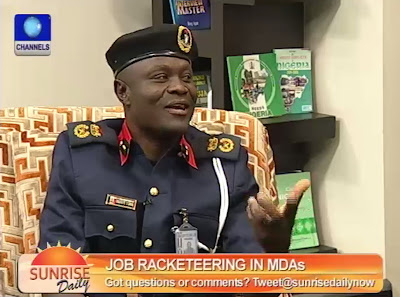 May 14, 2013 – My Oga At The Top Transferred To Oyo State As New NSCDC Commandant (Shem Obafaiye)

Former Lagos state NSCDC (Nigeria Security and Civil Defense Corps) Commandant, Shem Obafaiye who was suspended over a professional blunder on live TV has been transferred to Oyo State.

Mr Obafaiye who was replaced by Mr Clement Adesuyi, the Commandant for Oyo State chapter of NSCDC has been transferred to Oyo State.

According to sources, My Oga at the top was asked to replace Adesuyi officially last week.

“I am determined to serve in Oyo State and I know God will help me,” – said Mr Obafaiye.

This whole Oga at the top ordeal is a blessing in disguise for Mr Shem Obafaiye because life in Ibadan, Oyo State, Nigeria is less expensive than that of Lagos.

Wishing him the best.

Continue Reading
You may also like...
Related Topics:commandant, my oga at the top, oyo state, sham obafaiye, transferred