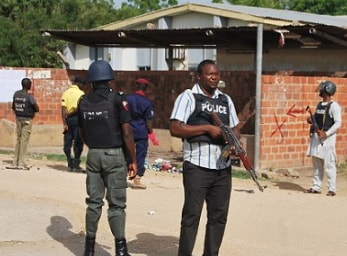 Some gunmen suspected to be kidnappers yesterday evening abducted a woman identified as Foluke in Eruwa, the headquarters of Ibarapa East Local Government Area of Oyo state.

It was gathered on Tuesday that Foluke and three of her colleagues who were coming from Temidire market were accosted by the gunmen along the old Ibadan-Eruwa Road around 6.30pm on Monday.

The abduction of Foluke who is a provision seller at Owode in Aborerin area of Eruwa according to a source is coming less than two weeks after the abduction of a canteen owner, Mrs. Folakemi Olufunmilayo in Igbo-Ora, town in the same local government area.

A native of Eruwa who spoke in confidence on Tuesday informed that the gunmen numbering about four accosted Foluke who drove the car and the three other passengers, seized their mobile phones, parked the car along the road and whisked Foluke away.

He said that the abductors after collecting the phones released the three passengers and whisked the victim away.

He, however, said he was not aware if the family of the victim has been contacted by the abductors.

“I can tell you that another woman, Foluke has been kidnapped in Eruwa on Monday. Foluke and three other people were coming from Temidire market when she was abducted around 6.30pm. The market is in Eruwa. There are four people in the car. She was the one that drove the car.

“Out of the four people, she is the only one that they kidnapped because she was the one that drove the car. They seized their phones so that they will not contact anybody until they get to the town. They parked her car and took her away.

“I know her, she sells provision at Owode in Aborerin area of the town. The case has been reported at Eruwa Divisional Headquarters. I learnt that the vigilante group and the hunters have been hunting for them. I can’t say that this is the kind of people that kidnapped her. And I don’t know if they have demanded ransom from the family”.

Police Public Relations Officer (PPRO), in the state, Mr. Olugbenga Fadeyi who confirmed the abduction, told newsmen that men of the state police command have been hunting for the abductors to ensure the release of the victim.

Fadeyi said, “Yes, it is true. It was a case of abduction.