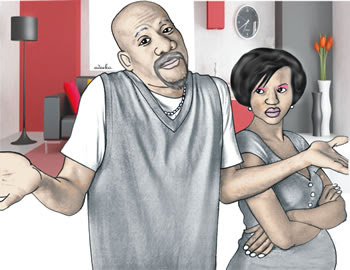 Mrs Elizabeth Shofunde, a 36-year-old trader who claimed that her husband impregnated another woman, on Monday prayed an Igando Customary Court in Lagos to dissolve her marriage.

Shofunde told the court that her husband, Babatunde, abandoned his matrimonial home to live with the woman.

“My husband abandoned us after he impregnated another woman; it is now three years he left us; he refused to pay the children’s school fees and house rent,’’ she said.

Elizabeth added that Babatunde battered her and refused to give her money for feeding the family.

According to her, Babatunde is a drunkard.

Responding, Babatunde did not deny the allegations but said that Elizabeth’s attitude pushed him to another woman.

He consented to the dissolution of the marriage, saying that he was also fed up with the union.

“My wife made life unbearable for me, and the frustration made me impregnate another woman,” he said.

“Whenever we are fighting, Elizabeth brings out a knife or bottle to stab me but I always escape,” he said.

“I had a domestic accident and was admitted in a hospital. Elizabeth only called me on phone and did not visit me.

“Because of that, I stopped giving her money.

The respondent added his wife denied him sex for one year.

The Court President, Mr Moses Akinniyi, adjourned the case until Dec. 18 for judgment.

Continue Reading
You may also like...
Related Topics:attitude, bad, wife