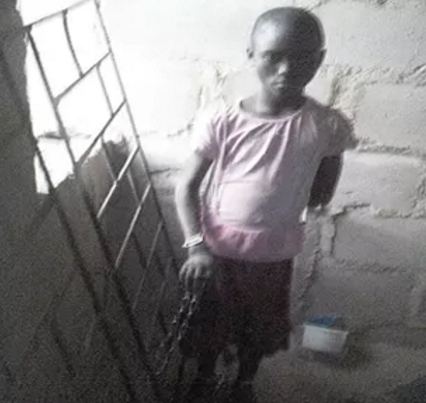 Mr Sunday Okafor, the husband of the woman who allegedly chained a 10-year-old girl in Abeokuta few days ago has made an excuse for his wife’s actions.

Mr Okafor who begged for leniency claimed that his wife is battling partial insanity.

This is what he told The Sun yesterday;

As for Promise, she keeps stealing from us. Times without count, I have been to the police in Adigbe to report her to them but they keep advising me to manage the situation. I can tell you that she has run away from the house up to seven times. Even her teacher in school complains of same thing and punishes her for it. She attends Saint Benedict Primary School, here in Adigbe.”

“To start with, I never knew she was chained. My wife did. All along, we have been calling on her people in the village to come and pick her, but they kept telling us to hold on till a later date. When I came in the first day and saw that she was chained, I set her loose, but did not know my wife was going to chain her again the next day.

I was surprised when I got to the police station and was shown the picture of how Promise was chained. I just want everybody to know that I didn’t chain Promise. It was my wife. I am not the type that intimi­dates children. My biological children and even siblings can testify to that. I think she did it based on the thought that the girl may run away again, although I was never in support of that.”

“My fiancé lives in that house and I came to visit him on Tuesday, I was in his apart­ment when I heard the cry of the girl.

Another woman from the neighbourhood came out too and we both agreed that I should give the girl some food to eat. I did, and when the woman (Chiamaka) came back, she came to me and issued a stern warning to me never to repeat what I had done. I didn’t mind her. The next day, she still chained the girl in the arms and legs. At that moment, the girl saw me and said ‘Aunty, please give me food to eat’. But I was reluctant to heed her request, because the woman (Chiamaka) had warned me to steer clear of the girl.

Not too long after, I saw two men approaching our building and immediately, I sensed that they were policemen and that was how they arrested everyone they could lay their hands on and took us to Adigbe Police Station.”