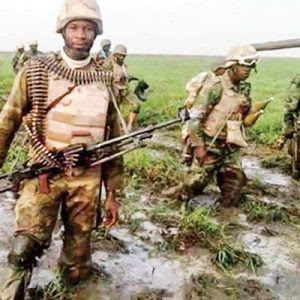 The military yesterday claimed that over 147 suspected Ijaw militants terrorizing residents of Lagos and Ogun state have been killed.

The militants who reportedly fled to the South West due to the ongoing military operation in the region have killed over 50 residents of Lagos & Ogun in the past weeks while few others were kidnapped.

The development has led to the desertion of some of the affected communities by residents as many of them continued to leave in droves until last Thursday when the military commenced a raid on the camps of suspected militants.

Speaking with our reporter, a local security source said that casualty recorded on the part of the militants as at yesterday afternoon might not be less than 150.

‘’The casualty as at yesterday as we were told was about 114 but this morning we heard that more of them have been killed and that the figure may be up to 150,’’ the source said.