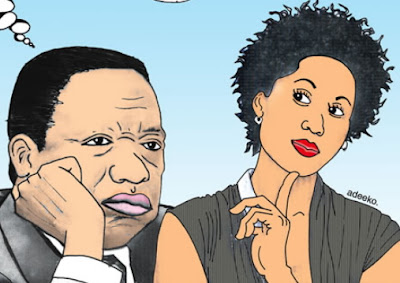 Adenike, 32,an indigene of Abeokuta, Ogun, told the court on Friday there was no more love between her and the husband, Abiola Bolarinwa.

The mother of two, who resides at Obawole, Okeira in Aguda-Ogba area of Lagos, said: “My husband constantly beats me and no longer cares for me and our children.’’

The woman, who described her husband as irresponsible, said he often demanded sex amid harassment and blackmail.

“He calls me unprintable names in the presence of the children.

“My husband often makes uncomplimentary utterances about me while forcefully having sex with me; he calls me a harlot,” she said.

The petitioner accused her husband of threatening her life, adding that he had turned her into a punching bag.

“I had to run away from the house when it became unbearable.

“There was a time my husband beat me severely and l was in coma for three days and admitted in the hospital for weeks.

“He is irresponsible, I want the court to separate us as I am no longer interested in the union.’’

She asked the court to grant the custody of their children to her.

NAN reports that the woman was fighting back tears in his passionate plea to the court to dissolve the marriage.

“I want to live comfortably and in peace.”

The respondent, Abiola, a surveyor, however, denied the allegations, describing his wife as wayward and arrogant.

“My wife is stubborn, rude and has no respect for me as her husband.’’

The 38-year-old husband, however, told the court: “I still love her; I do not want the marriage dissolved.

“l promise to resolve whatever disagreement and conflicts we are facing.”

The court’s President, Mrs Ibironke Elabor, who advised the estranged couple to keep the peace, adjourned the case until March 1 for the Alternative Dispute Resolution (ADR) to take over the case.

My Wife To Be Is Insatiable In Bed, She Never Gets Tired Now I’m Scared Of Marriage – Man Cries Out
My Wife’s Demonic Cousin Is In Love With Me, She Walks Around In Bra & Pant , Please Help!