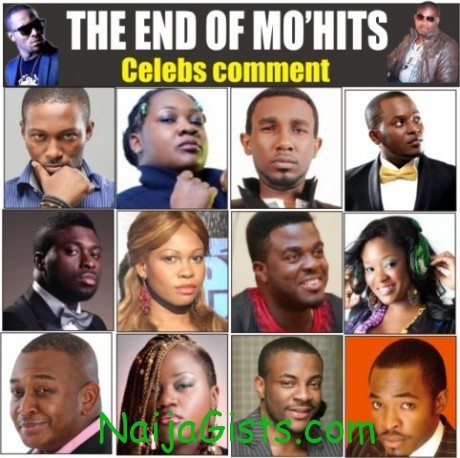 Guys as we are all aware that the business relationship between D’banj and Don Jazzy of Mohits record has ended, (read the official confirmation here) Nigerian Celebrities are currently speaking up.  naijagists.com

Below is what popular Nigerian Celebrities are saying on this breaking news.

Terry Tha Rapman: Well, first of, I don’t want to believe it’s true. Who knows it might be a publicity stunt. But if it’s true, then it’s sad because they were about to make history with the alliance with G.O.O.D Music. Now Mo’Hits’ fans are torn apart and it might affect both of them.

M-Trill: I think it’s a sad development not just that they split but the way they did. I wish it was more cordial. Now, I have renewed my respect for Kenny Ogungbe and D1. I wish them both the best…

Demola Ogundele (Notjustok): The split is sad. The good thing is that they are still both alive and have the opportunity to drop music that we can still enjoy. The bad thing is that we won’t get to enjoy the Synergy and the magic they have created together in the past. I wish them both blessings as they move on to their individual goals.

Evaezi: I’m genuinely speechless and sad. They made a great team… Their chemistry was unbelievable…and you could feel it in their music. As for the effects, I honestly don’t know. I guess we’ll have to wait and see.

Cyrus Tha Virus: I really think it’s not as bad as a lot of people are making it out to be; both parties have paid their dues together as a formidable Mo’Hits entity. Now I guess it’s time for chasing separate personal dreams; what it portends for the Nigerian Music industry? I guess we will now see a lot of the other ‘labels’ struggling to become the number one label in Nigeria and I can’t wait to see what Don Jazzy and D’banj can do separately.

Goldie: I feel it’s very sad, especially as together; they were a force to be reckoned with. It’s hard to imagine how each would cope without the other.

Princess: They are both roles models to a lot of people. They should sort out their differences but not break up

Overdose: Both men are grown and make decisions. I don’t think it has anything to do with other people making music.

Aremu Afolayan: a fan of them. I don’t know what their problem is. They make a hell lot of money from us Nigerians. They should call themselves together and settle it. It’ll affect a lot of things in the industry.

OC Ukeje: The music industry will do well with or without them. They will need people. Don Jazzy has an advantage over him as a producer and singer.

Olisa Adibua: The industry is bigger than them. So it can’t affect them. It’s time for the industry to get more people. The artistes under the label won’t suffer, just that the friendship between the two will. They might come back again like the Beatles

Jacob Akinyemi Johnson: Well the truth is I don’t have all the facts about the matter yet, and as such I can’t really speak on it for now. Don Jazzy and Dbanj are both my friends so I have to be careful what I say about it for now.

Ebuka Obi-Uchendu: It’s hard to react yet because we’ve not heard from D’banj yet, but in all I think music has gone beyond individuals, it’s not the end of the world. The good thing is Don jazzy has said he’s gonna continue doing music and D’banj too will continue, though maybe on an international level, but at any rate, I think they will continue doing good music.

eLDee: I don’t see any negative effects on the industry. I think they are going to continue to do good music as long as they are active. It’s just unfortunate things turned out this way and I wish it wouldn’t have come to this. I’ve been through this before and I can tell you it hurts. But I wish them the best.

Toolz: I think it’s sad because you really can’t talk about Nigerian music without mentioning them. However, I see it as a whole new chapter for the artistes on the label and I also think that won’t stop them from doing music.

Steve Babaeko: Unlike most people my focus is not on the split but the outstanding contribution that both Don Jazzy and D’banj have made and are still making to Nigeria’s music industry. Change is part of this game, sadly so. In a country where millions of young people are struggling to find their voice, these gentlemen not only found theirs they spoke eloquently about the courage, perseverance and creativity of Nigerian youths. I wish both of them good luck in their future pursuits.

Olumide Iyanda: Well I think it definitely has affected the music industry, I was there when the whole thing started in 2004. Anyway, for now, let’s see how the whole thing goes.

Segun Demuren: I think it’s a shock, especially coming on the heels of a major international deal, I wish it didn’t have to happen this way. Don Jazzy is probably the best producer in the country right now, and D’banj, in spite of what people may say or think, I mean, I know he drew quite a lot of criticism on twitter and the like, but he is one of the most electrifying performers anywhere. I think they will both go on to do very well in their careers.

Modenine: Well I’ve known D’banj for quite a while now, more than 10 years ago, and I’ve also met Don Jazzy as well and we all know they are both an award winning team. I’m not about what went down and all of that, but It’s unfortunate. I do wish them well though.

Illbliss: It came as a shock. They made great music as a team but then that’s the music business. Life goes on uninterrupted.

Darey: It’s pretty sad to hear that because they are all my friends. I hope everything turns out for the best