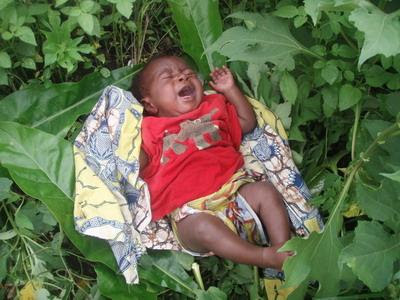 Drama unfolded yesterday in Delta State, Nigeria during the dramatic rescue of a 7 months old baby boy who was stolen from his parents on July 1st, 2012.

The innocent child who was declared missing for three days was later found at Agbor in Ika South LGA of Delta State.

According to Police spokesman, 5 suspects have been arrested in connection with the child theft.

We learnt the child was snatched from his mom, Linda Madaka on the 1st of July during a burial service at around 11pm at night.

The Dramatic Rescue Of The Stolen Baby Boy

Based on the information released from detectives, the suspects were trailed to no 69 Olo st, Umunede where a 24-yr old man identified as Colins Osekihe was arrested. He later implicated one Chuks Elue, a father of 14,”

“The two suspects led the detectives to Agbor where the child was recovered in good health from one Patience Chukwuemeka, a mother of seven children, on Tuesday. Also arrested in connection with the case include Chuks Okwudili, male, 18, and Uche Anyasi, male, 16.”

Delta State Police Spokesman said the suspects confessed that they had bargained to sell the child to Patience Chukwuemeka for N250, 000.

He said that the suspects, including 52-year-old Chuks Elue and his wife, and one Patience Chukwuemeka, 40, confessed their involvement in the crime.

He said that efforts were on to arrest other fleeing suspects, adding that the suspects would soon face the full wrath of the law.

Parents and guardians are hereby advised to diligently secure their children from syndicates stealing children nowadays.