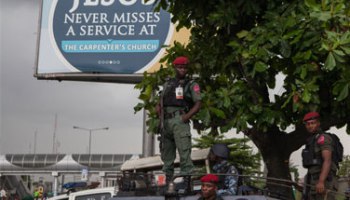 The peace in Jeddo, Okpe council area of Delta, on the outskirts of Warri metropolis, was shattered Monday evening as operatives of two sisters security agencies; police and the Nigerian Air Force, engaged each other in a fierce shootout.

Although there was no death record from the engagement, the Nation gathered that several persons, including personnel of both agencies and some residents of the area, sustained various degrees of injuries even as properties including vehicles and makeshift homes were destroyed.

The Nation gathered that trouble started when personnel of the Counter Terrorism Unit (CTU) of the police got engaged in a hot argument with a lady, which resulted in a physical assault as the police personnel reportedly slapped the lady, who happens to be an air force personnel’s daughter.

The lady went back home to relate her experience to her father, who reportedly mobilised his men to storm the spot where his daughter had been assaulted.

The police official also called his colleagues in when he sensed that the situation was about to go out of hands.

Security sources disclosed that the Airforce, on arriving the scene, opened fire which was replied by the Police special squad with people scampering for safety.

Alhough no life was lost in the incident, several people, including the personnel of the two agencies, sustained injuries while several vehicles were vandalised and make shift properties of traders destroyed.

The incident has scared most residents out of their homes, fearing there might be further faceoff between personnel of both bodies.

Although efforts to get an official reaction from the police was not immediately successful as the police spokesman at the Delta state police command, DSP Andrew Aniamaka, said he was driving when reached, a senior police source confirmed the incident, but was unable to talk much.

It was also gathered that the Area Commander of the Police in charge of Warri, Mohammed Shaba, an Assistant Commissioner of Police (ACP) met with the new Commanding Officer of NAF for several hours to find a lasting solution to the clash.

“I am in a meeting over the clash. I can’t talk on it. It is the Commander of the Nigerian Airforce that call talk on it”, he said on phone.

Delta State Commissioner of Police, Zanna Ibrahim, said he was not aware of the incident but promised to investigate.