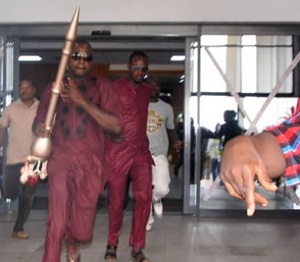 It was one test of endurance for the Nigerian democracy when hoodlums, last week, stormed the Senate chamber and took away the parliamentary mace. The mace was later recovered though.

Proceedings in the legislative house were momentarily grounded as thugs storm-raided the red chamber at plenary and seized the parliamentary symbol of authority. The invaders had allegedly aided suspended Senator Ovie Omo-Agege (Delta Central) to gain forced entry into the legislative chamber before going for the mace, advising many of the lawmakers present to vote with their feet for safety. They thereafter bullied their way out of the Senate complex, fighting off a challenge mounted by security officials of the National Assembly (NASS) to deliver the seized mace into a waiting vehicle with which they made their get-away. In the ensuing melee, NASS security officials were reported injured, with a female agent said to have fainted when the hoodlums struck her on their way out of the complex. At least one senator, Olamilekan Adeola (Lagos West), fell into the hands of the hoodlums as a collateral hostage until he jumped to freedom as they made their hasty exit.

After the hoodlums had made away with the mace, the Senate determinedly got back in session with a spare mace, issuing concerned security agencies a 24-hour ultimatum to recover the stolen mace. Meanwhile, fury raged in both chambers of the NASS over the brazen assault on that arm of government.

Earlier, the chamber’s spokesman, Senator Abdullahi Sabi, issued a statement in which he qualified the assault by thugs as treason. “This is an act of treason as it is an attempt to overthrow a branch of the Federal Government of Nigeria by force, and it must be treated as such. All security agencies must stand on the side of due process and immediately mobilise their personnel to retrieve the mace and apprehend the mastermind and perpetrators of this act,” he said.

Legislators in the House of Representatives were no less galled, with members during a debate in the green chamber describing the incident as a terrorist attack. “This arm (of government) remains very vital. Thugs came into the Senate chamber while senators were sitting and they took away the mace in a waiting vehicle… That’s sacrilegious,” House Leader Femi Gbajabiamila said while raising a motion on the incident. Later, Deputy Speaker Yusuf Lasun, who led a House delegation on solidarity visit to the Senate, said: “Let the pretenders know that it is the Assembly that defines democracy. We are in solidarity with (the Senate), and we will make a Resolution to ensure that the mace is recovered within 24 hours. You can rest assured that whatever touches you (Senate) touches the House of Representatives.”

But the outrage was by no means restricted to legislators. Every Nigerian with a sense of decency and regard for the country’s democracy – imperfect as it is – must have felt violated. Among others, the Executive arm of government expressed shock at the invasion of NASS and seizure of the Senate mace by thugs, saying security agencies had been ordered to swiftly unravel the circumstance of the security breach. Information and Culture Minister Lai Mohammed added in a statement that security around the Assembly complex was being reinforced to prevent a reoccurrence. And for once, the views of the ruling All Progressives Congress (APC) and opposition Peoples Democratic Party (PDP) nearly coincided, with both condemning the incident and canvassing that the masterminds and perpetrators be speedily brought to justice. Only that the PDP also saw an opportunity to appropriate some partisan capital by taking potshots at the security records of the party in power.

The police subsequently reported the mace recovered from where it was dumped by the hoodlums, following a security lockdown of Abuja highways. According Force Deputy Public Relations Officer Aremu Adeniran, the parliamentary symbol was abandoned at a point close to the Abuja city gate, where a passer-by saw it and alerted the agency.

“Police teams engaged in massive raids of identified criminal spots/flashpoints, stop-and-search operations, visibility and confidence building patrols (and) intelligence gathering, which forced the suspected miscreants to abandon the mace at a point under the flyover before the city gate where a patriotic passer-by saw it and alerted the police,” Adeniran said in a statement. He added that “discreet investigation” was ongoing to bring perpetrators of the Senate assault to justice.

Whereas last week’s incident was the first time an assault was unleashed on the NASS from without, leading to momentary loss of the Senate mace, it wasn’t the first time the parliamentary symbol went missing in controversial circumstances. Former Senate President, the late Dr. Chuba Okadigbo, in 2000 hid away the mace (some people alleged: in his native community of Ogbunike) to frustrate rebel senators who were bent on convening a meeting to impeach him at the suspected instigation of then President Olusegun Obasanjo. But the determined senators got around that hurdle to effectively kick out Okadigbo and name Pius Anyim his replacement.

Let me be clear that I am as outraged as anyone else by the sheer banditry inflicted on the hallowed chambers of the Legislature last week. Because, by all means, it was a brazen affront on Nigerian democracy and an existential threat to a core component of our governance system But if the fury was just all about the seized mace, meaning there may be some appeasement now that it has been recovered, we could ask: what really is in the mace?

It is routinely said that the mace is the symbol of the parliament’s authority. And that is the point: it is a mere symbol. The parliament could as well stock many spare maces that would make any emergent threat to a single unit utterly inconsequential to the legality of its operations. Actually, that obviously is the case already with the Senate, and most likely all other parliamentary chambers in the country. It was the apparent reason senators were able to swiftly reconvene after the hoodlums made away with the official mace last week.

The point here is that the mace being only a symbol, the authority of a parliament, just as well as every other locus of power, derives from its connectedness with the public that voted the representatives into those positions of power. In effect, while the fury over the mace stolen last week was fully warranted, a worthwhile objective for the ‘honourable’ and ‘distinguished’ members of the NASS to pursue is winning over the electorate by their activities and comportments. And there is much to be desired at the moment in that regard, isn’t there?

By extension, this is also the reason why the police recovering the stolen mace isn’t at all sufficient to redress last week’s assault on the Nigerian democracy. The sponsors and perpetrators of that assault must unpacifiably and unfailingly be brought to account.

About the author: Please join me on kayodeidowu.blogspot.be for conversation.

Continue Reading
You may also like...
Related Topics:mace, nass, stolen