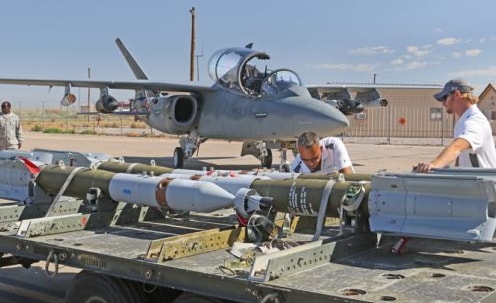 US Promises To Deliver 12 Fighter Jets, Bombs & Rockets Nigeria Paid Over $400Million For In 2020

Nigeria will have to wait another two years for the delivery Of 12 Super Tucano fight jets and others weapon ordered from the United States to combat Boko Haram.

A senior U.S. Department of State official stated this on Sunday during a background briefing at the U.S. Consul General’s Residence in Ikoyi, Lagos.

The official, who confirmed that the Nigerian government had paid for the war planes, said sale of the aircraft with weapons and services worth over 400 million dollars included bombs and rockets.

The NAN learnt that the propeller-driven plane with reconnaissance, surveillance and attack capabilities is made by Brazil’s Embraer.

Embraer’s second production line is in Florida in a partnership between Embraer and privately held Sierra Nevada Corp of Sparks, Nevada.

The Super Tucano is said to cost more than 10 million dollars each and the price could go much higher depending on the configuration. It is powered by a Pratt & Whitney Canada PT 6 engine.

Continue Reading
You may also like...
Related Topics:fighter jets, rockets, us deliver