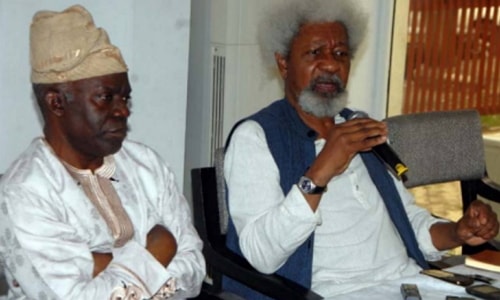 Prof. Wole today today called on Nigerians to be careful about the people they intend to trust their votes with in the 2019 general elections.

Soyinka made the call in Lagos at a programme to commemorate the 80th posthumous birthday of late human rights activist, Chief Gani Fawehinmi.

NAN reports that the programme, organised by the Fawehinmi family, had the theme: “Democracy for the masses through proper and effective governance”.

Fawehinmi, a human rights lawyer and activist, who always stood against misrule by successive governments, was born on April 22, 1938 and died on Sept. 15, 2009.

Soyinka said there was need for the electorate to be vigilant as some politicians were seeking offices just for self-interests.

He warned that some anti-democratic forces were already seizing the political space as the election got close, claiming to have solutions to the nation’s problems.

He urged the electorate to ignore those forces and their coalitions, saying their knack to always want to decide who becomes leader was an insult to Nigerians.

He, therefore, said such people, who he said had failed in the past, had no moral right to decide for Nigerians the way to go in 2019.

“”And again, enough of these people recycling themselves. Nigerians should make a wise choice in 2019,” he said.

He admonished them not to allow themselves to be hoodwinked by people who had nothing to offer the country.

Falana said the power to change the country was in their hands, urging them to use their Permanent Voter Cards to achieve that in 2019.