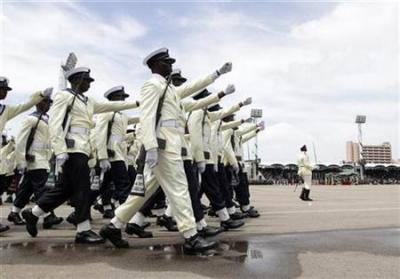 According to the daily times, a Nigerian Navy Personnel by the name of Harry allegedly stabbed his girlfriend to death, over the weekend, at the Nigerian Navy Base in Ojo, Lagos State Nigeria over claims of infidelity.

Ms Itoya met her untimely death when her boyfriend, who had just returned from a Joint Task Force mission in Jos, Plateau State, stabbed her severally while she was asleep in their apartment.

After stabbing her, Harry stabbed himself. Neighbours who heard screams from the apartment rushed in and found  Itoya lying in a pool of blood.

While neighbours were taking her to a Naval hospital in the base, she died. Sources at the NNS Wey, Ojo Naval Base said that Harry, who sustained injuries, has been placed under arrest at the Nigerian Naval Reference Hospital, Ojo.

What is going on with this new stabbing while sleeping in Nigeria nowadays. A Nollywood actor was last week stabbed to death while sleeping by his wife. God help us o!