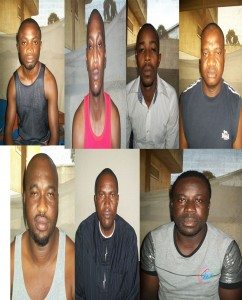 According to the Daily Post report, the 8 suspects were caught with 10.635kilogrammes of narcotics.

One of the suspects, Tembo Gideon AKA Benson Okechukwu a Nigerian travelling to Thailand with a Zambian passport concealed 2.522kg of methamphetamine inside some native clothe.

Mr Hamza Umar, the Commander of Anti-drug agency released the names of the suspects and they are.

“it is sad that these suspected drug traffickers are behind bars when they ought to be with their families this festive season. Drug trafficking and other criminal acts will only lead to misery, shame and unfulfilled dreams”. said NDLEA Chairman Ahmadu Giade

The arrested drug traffickers are set to be charged to court.

See where the quest for quick wealth has landed them.