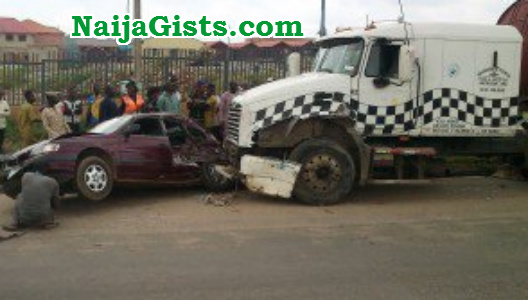 The truck was descending a slope when it ran into the Toyota car, which provided an opportunity for the petrol tanker to come to an abrupt halt.
‎The men of the Federal Road Safety Commission rushed to the scene to take the injured to the hospital.

An eye witness account revealed that incident occurred around 12 noon.

The eyewitness, who pleaded for anonymity, said: “The driver really tried, it could have been more disastrous if he hadn’t managed the situation well. The tanker is filled with 33,000litres of petrol. Who knows what would have happened if the tanker fell.”

‎It was gathered that the driver of the tanker ran away immediately after the accident but was later found by the policemen.
Other vehicles affected by the accident were two commercial buses, a Honda Civic salon car‎ and two commercial motorcycles otherwise known as okada.

The Osun State Sector Commander of the FRSC, Mr. Mohammed Husaini, who disclosed that only one person was injured, warmed motorists against putting faulty vehicles on the road.