The US Supreme Court today declared same sex legal marriages in all 50 States in the US.

This is what Justice Anthony Kennedy said few hours ago:

“Under the Constitution, same-sex couples seek in marriage the same legal treatment as opposite-sex couples, and it would disparage their choices and diminish their personhood to deny them this right,”. 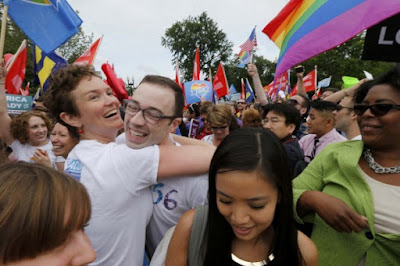 All four of the court’s most conservative members — Chief Justice John G. Roberts Jr. and Justices Antonin Scalia, Clarence Thomas and Samuel A. Alito Jr. — dissented and each wrote a separate opinion, saying the court had usurped a power that belongs to the people.

Gay couples all over the United States have declared today a day of celebration as they now have the right to move freely and do what normal couples do.

Meanwhile, Texas is planning to appeal the ruling.