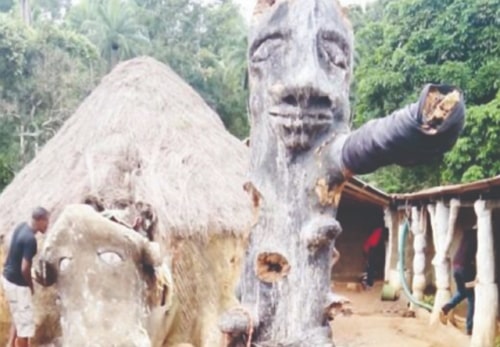 In 2004,  an alarm bell rang across the world over the happenings at a shrine in Okija, a sleepy community in Ihiala Local Government Area, Anambra State.

Known as ‘Ogwugwu akpu ‘, the killings associated with the shrine and other untoward events in the place gave birth to the discovery of others like ‘Ogwugwu Isulo’.

The sleepy community became popular over night for the wrong reasons, as popular politicians flooded Okija for in search of power and for oath taking.

Like many communities in Igbo land, Okija harbours many shrines. But the most popular was the Ogwugwu Akpu Shrine located on the bank of Ulasi River. It is located in Ubahuezike, which is one of the 30 villages in Okija and lies at the end of the village.

About 19 years ago, Ogwugwu Akpu assumed a new status when some educated young people in the village decided to become priests of the Ogwugwu, thereby bringing some ingenuity into its worship.

That was how Okija became famous as people from various parts of Igbo land and beyond came there to administer oaths on their people suspected to have committed one offence or the other. Before then, Ogwugwu Akpu was just like any other shrine in Igbo land which served as checks against impunity and man’s inhumanity to man. 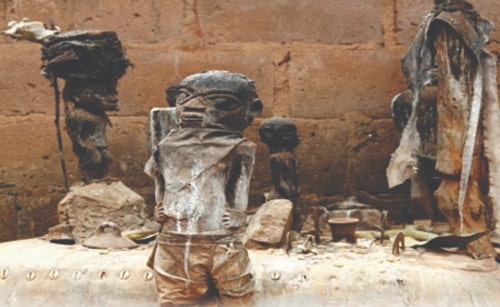 For instance, people who were aggrieved over the manner they were treated in business deals, land disputes, among other issues, took their cases to the Ogwugwu shrine.

Despite the destruction of the shrines in the area 15 years ago, new ones have sprung up and the business has started booming again. Some of the new shrines include the Ulasi Okija shrine, Ogwugwu Mmili Umuohi and Ogwugwu Ajani shrine. 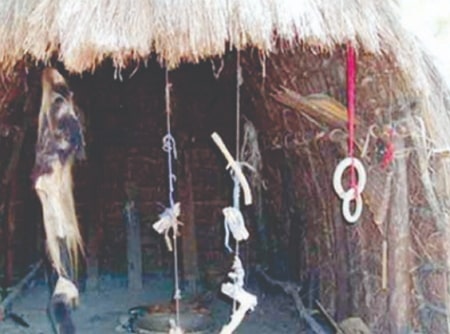 Not only that, the community boasts about 10 parishes of such churches and three archdeaconries. Apart from the shrines scattered all over Okija, the community also hosts the country’s first private faith-based university, the Madonna University.

The emergence of the new shrine in addition to the old ones has brought back old memories about Okija.

Speaking with The Nation, one of the community leaders and big time farmer in Okija, Hon C.Y. Obi, said the shrines had returned in full force.

He maintained that the people of Okija are not known or associated with killing, adding that dumping of human heads in the shrines painted the community black in the eyes of the world.

Obi, who is also into politics in the state, said:

“I am from Okija and we are proud of our community, no matter what people think or believe.

“The priests in charge of those shrines never killed anyone. Rather those who believed in those deities, who came to swore, would go to their places and die while their bodies would be brought to the shrine in the belief that they were killed by the deity.

“Some of us from the place don’t believe or go near the shrines. But those who believed in them were succumbing to the threats of the deities out of fear.”

Mrs Bridget Obi, another indigene of Okija and one time Commissioner for Women’s Affairs in Anambra State, said she does not believe in the shrine.

“I believe they (priests) went the extra mile to use that place for 419 (fraudulent purposes) to extort money and deceive people.

“What happened there was not the culture of our people. Traditional religion is not what we saw in that place. What we saw was just a barbaric act.

“I don’t think the society today needs such extremes. It was actually due to lack of justice that made people to go to that extent. If the courts are working, if the judiciary is working, if justice is obtained in the right ways, the police and army are doing what they are supposed to do, even the community does the right things, there wouldn’t be any reason for this kind of archaic form of justice.”

Obi maintained that the so-called Okija shrine justice was jungle justice, adding: “I don’t believe in it.”

Another citizen of Okija, Comrade Chris Okwuosa, told The Nation that the shrine should serve as a tourist centre in Nigeria.

He said he had not visited any of the shrines because he does not believe in them, adding that the people of Okija should be paid compensation for being given a bad image by the government.