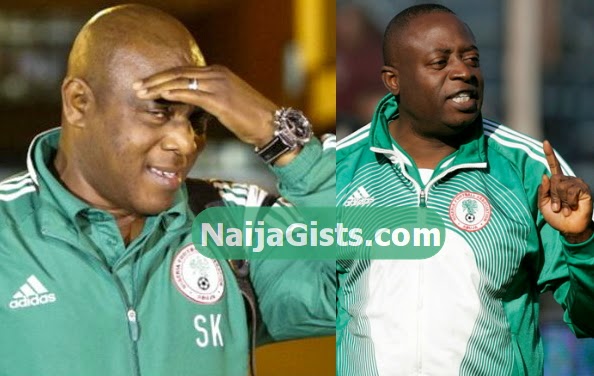 It is no longer news that the Nigerian Football Federation has fired Keshi and replaced him with Amodu.

The now Ex-Super Eagles Coach in reaction to his sack on Wednesday night by the newly elected Nigeria Football Federation’s board, has said it is time for him to move on.

Keshi who seemed to be in good spirits told PREMIUM TIMES early Thursday: “It is about time for me to move on. This is not the end of the world for me.” 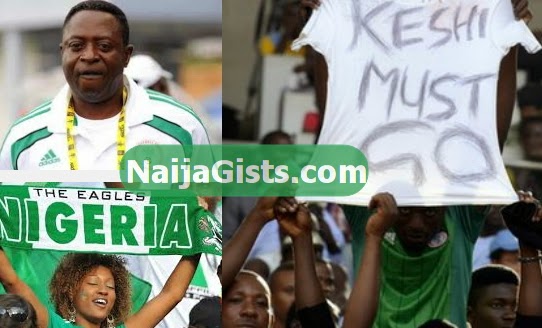 During Nigeria’s Wednesday encounter with Sudan in Abuja, a match which ended 3-1 in favour of the Super Eagles, Nigerian fans at the packed stadium started chanting as Keshi stepped onto the pitch: “You must go.”

The coach, who took the Super Eagles job three years ago, won the 2013 African Cup of Nations, AFCON, in South Africa and led the team to the 2014 FIFA World Cup and the 2014 Confederations Cup, both in Brazil.

However, he has been struggling to qualify Nigeria for the 2015 AFCON, and has so far recorded a home and away defeat in Calabar and Sudan respectively.

Following the 2013 AFCON, Keshi failed to stick with the winning team of players and has been inconsistent in his choice of players for other competitions. He was criticised for the calibre of players he selected to play at the World Cup, a run that ended at the round of 16.

Meanwhile, in spite of the sack, he and his former assistants, Daniel Amokachi and Ike Shorounmu, are expected to proceed for a coaching course, fully funded by the NFF in any country of their choice.

Tayo Balogun, a sport administrator on Thursday said that Keshi, was responsible for all the events that led to his sack.

Balogun, however, said that the coach personalised trivial issues concerning the team and also undermined many players.

“Keshi is the architect of his own failure. He had more players that should have made the teams but he didn’t invite them,” he said.

“Most goals we conceded were defensive errors. He was a defender in his days and he couldn’t organise a good defence.”

Joseph Dosu, a former Super Eagles player, said the NFF took everyone unawares with the decision to terminate Keshi’s appointment.

“I also thought he would be left alone after (Wednesday’s match against Sudan) but the committee know what’s best for Nigerian football,” Dosu said.

Dosu, however, wished the makeshift coaches well and hoped they would qualify for the 2015 African Cup of Nations.

Ibrahim Galadinma, a former chairman of the NFF, said the board had made a decision they felt was best and should be treated as such.

“I cannot say whether it was a good or bad decision, but I believe they are working for the greater good of Nigerian football,” he said.

Folorunsho Okenla, a football analyst said he believed the decision was in the best interest of Nigeria.

“It’s obvious that the Eagles in recent outings didn’t perform well, especially at the ongoing (Africa Cup of Nations) qualifiers,” he said.

“I think it is a good development that will help to correct Keshi’s mistake.”

Nduka said hiring and firing was synonymous with coaching.

The coach said on telephone that Keshi’s attitude to the job of late had changed to something unworthy of a good coach.

“He has been in constant fight with some players whom he tagged disloyal,” he said. “Great players all over the world are known to be pompous, so, it is the duty of the coach to bend such character to his own advantage.”

He said that it was because of his personal interest as against national interest that made him not to invite better players to the team. He reminded the sacked coach that a national team of the status of the Super Eagles was not meant to be run like a chiefdom.