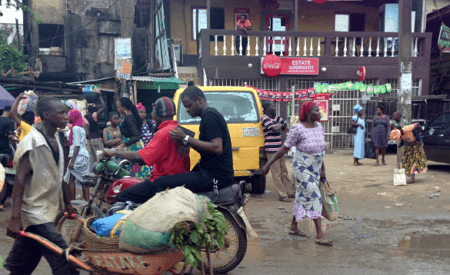 A troublesome woman has been arrested in Lagos for inflicting injury on her 43-year-old house help, Joy Kanu.

The suspect, Esther Ijeoma Amaechi according to police report abused her house help for almost 2 years before she was resported.

The abuse we learnt happened at 23 Simach Street in Agric area of Ojo Lagos.

The victim, a mother of 9 is currently  on admission at Cottage Hospital, Area F, Ikeja while the suspect is in the custody of the Human Rights Desk at the Lagos State Police Command, Ikeja.

The house help has a festering head injury, her hands appear broken, and she has several scars on her body.

The plight of the victim has attracted the attention of an NGO, Girl Child and Women Development Foundation (GC-WODEF).

A representative of the NGO, Mrs Juliet Nwadinma-Ohanyiri, was at the Cottage Hospital on Thursday to see to her welfare and that justice is done in the matter.

Eyewitnesses said the suspect always accused her house help of stealing from her shop and that at the slightest provocation she would beat her with any hard object she could lay her hands on.

It was gathered that the suspect returned home on Wednesday and discovered some items missing in her shop.

In anger, she was said to have beaten her house help until blood started oozing from her head.

Fearing that Kanu might die at the hands of her employer, neighbours reported the matter at Ojo police station.

This led to Mrs Amaechi’s arrest and the matter referred to the Human Right Desk of the Lagos Police Command, Ikeja.

The police yesterday conducted an x-ray scan on the victim’s head and her two hands.

Sources said the suspect may appear in court soon once investigation is completed.