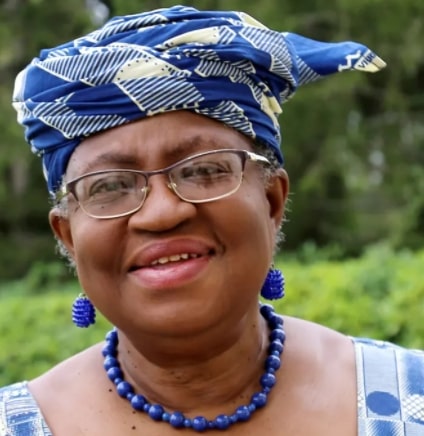 INTERNATIONAL WOMEN’S DAY: WHAT WOMEN CAN LEARN FROM THE EMERGENCE OF DR NGOZI OKONJO IWEALA

The emergence of Dr Ngozi Okonjo Iweala as the new WTO DG has been received with great joy all over the world. Her appointment as the Director General of the 26 year old Geneva based body with 164 member countries representing ninety eight percent of the global trade is ground breaking and highly commendable. The implications for Nigeria and for women in the global sphere are far reaching.
For the African continent, the news is particularly disruptive in positive ways. This is because the continent is plagued by artificial limitations placed on the path of women, reducing their values to only child bearing and placing a glass ceiling on their individual ambitions. We are still battling with girl child education and primary healthcare for young mothers. The gender inequality in both corporate and political sectors is quite wide. Ours is a society where women are defined by their ability to get married and stay married. But no great man or women is remembered for marital achievements. Ngozi’s story shines bright, giving hope to millions of young females all over Africa, assuring them that their dreams are valid and that if they put in the work and believe in themselves, they too can change the world. Apart from Okonjo Iweala, there are other African women who have excelled in their chosen career and have proven that African women given the opportunity always show uncommon leadership ability. We can analyse Okonjo iweala’s emergence from the following point of view

PREPARATION AND BEING READY

Ngozi’s life trajectory shows what it means to be prepared. It is said that success is when preparation meets opportunity. Those coveted positions didn’t just fall on her lap. She was empowered with the best of education in ivy league institutions, graduating from Harvard in 1976 and earning a PhD in regional economics and development from Massachusetts Institute of Technology in 1981.

Furthermore, she has received several honorary degrees from different Universities worldwide. She has a 25year old career at the world bank as a development economist, rising through the ranks to get to the executive position. She put in the work and made excellence her mantra. It was because she has excelled in her position that the government of President Olusegun Obasanjo noticed her and snapped her for a national assignment where she posted stellar performance, spearheading negotiations that led to debt forgiveness of the $30bn Paris Club debt being owed by Nigeria.

She is the only woman in the history of Nigeria who has had the honour and the privilege of being the federal Minister of Finance twice. That shows that there is something she was doing right. Her present job is no doubt well deserved.

Had it been Ngozi’s parents married her off at a young age, her dreams and all of her achievements would have been buried, enriching the cemetery. Her story is a testament to the beauty and the importance of the girl child education. It is fundamental to the building of future stars. It equips the mind, giving it new windows through which it can see the world. It is the easiest way of poverty alleviation in a sustainable way and societal enrichment. Nations who depended on building their human capacity through education have all excelled in all spheres of development. Africa can never go wrong with education.

THE GIRL CHILD IS ALSO IMPORTANT

The girl child in Africa still remains a topic that raises concern due to the orientation of most African families, made worse by poverty. A UNESCO estimate states that 134million girls are out of school due to poverty, cultural norms, poor infrastructure or war. The number is quite staggering. Educating the girl child isn’t just about providing educational facilities to them. It is also about ensuring that they are safe while being educated. Putting in place facilities to help them learn skills to navigate and adapt to a changing world is important. And educated girl child will much likely marry at an older age and have fewer children. She will much likely have a better understanding of how to survive and thrive in a difficult world and will not allow her marriage to bury her dreams. Training the girl child is crucial to the onerous task of alleviating poverty. A trained girl child will in turn ensure that her kids are exposed to the same opportunities she had in order to excel better than she did. Training the girl child is an important part if the war against poverty will be achieved.

It was the holy book that states that he who is not faithful in small things cannot be faithful in bigger things. Throughout Ngozi’s years in both private and public sectors, including multilateral institutions, she has guarded her integrity like her life depended on it. Unlike most professionals who dabble in politics and get enmeshed in scandals, Ngozi has maintained her professional standing, avoiding pitfalls and temptations that come with power in a thid world country like Nigeria with weak institutions. Despite several attempts by vested interests and corrupt individuals to bend her will and make her dance to their tune, including kidnapping her aged mother when she was Nigeria’s finance Minister and Coordinating Minister of the economy, she kept her head high, stubbornly refusing to give in to their demands. She is conscious of the verdict of history. No wonder she is courted by several establishments worldwide. Currently, she sits on the boards of Standard Chartered bank, Twitter, Global Alliance for Vaccines and Immunization amongst several others. That is result of unquestionable integrity.

Ngozi couldn’t have gotten this far with laziness and slothful attitude. Getting into ivy league institutions meant she excelled greatly in her high school. Conscious of her dreams, she came out in flying colours, determined to make an uncommon impact in the world. With her placement in the world bank, she continued to put in the grind, rising through the ranks over a long period of time. Her stint as a two time Minister of Finance in Nigeria saw the country recording huge wins in the area of strengthening of institutions through innovative programs and entrenching transparency. Her Youwin initiative also sought to introduce a merit based system in Nigeria’s grant program. Her foresightedness and strong resolve made her to convince the political class that it is very essential that some portions of our earnings be saved for the future when oil may lose its relevance. This led to the establishment of the Sovereign Wealth Fund. Today, the country is better for her wisdom.

Throughout her academic and professional life, Ngozi has remained consistent with her values and her dreams. Excellence and integrity remained her watchword. While playing in the murky waters of Nigerian politics, she didn’t lose sight of her mission and the need to maintain her forthrightness. She was not carried away by the perks of public office and the temptations that come with it. Till date, she has not been indicted for any misdeed throughout her two tenures as the finance Minister of Nigeria.

Ngozi is a perfect example of someone who was able to strike a balance between work and professional life. Her story tells us that one can achieve great things and still be a wonderful wife and good mom to her kids. It is a delicate balance. Regardless of the demands of her job, she was able to maintain her home front, giving birth to kids who have gone ahead to excel in their fields. Indeed, her story is perfect in all ramifications.

When Socrates, the Athenian Philosopher cautioned, “Man know thyself”, he suggests a radical approach towards self discovery and identification. One without an awareness of his roots is like a building without a solid foundation. It is the foundation that gives colour to the dreams, ensuring distinctness of vision.
Ngozi Okonjo-Iwealla has many beautiful parts. She is all shades of awesomeness. Perhaps, one of the significant part of her person is her unmistakable identity as an African woman. Always dressed in African prints and a signature headtie, she is ever proud of her roots. Ngozi has spent considerable part of her life working in multilateral institutions and living in the Western world but she has not allowed her work environment to swallow her identity. She is very conscious of her root and that makes her unique. She has maintained her Nigerianness through her accent and her dress spectacular sense. She is not carried away by Western values. She has maintained her indigenous names and has never shied away from proclaiming her identity boldly.

This singular attitude of hers is a huge image making credit to Africa. Stories of Africa in the Western media is usually a buffet of tragedies and death. Africa is portrayed as a continent bedevilled by war, poverty and hunger, ever dependent on aid. Ngozi’s image and conscious identity on the other hand tends to turn the stories around, telling the world that something good can actually come out of “Egypt”

How Nkerehi Women Protested Against The Law
Anambra 2021: The Issues We Are Not Discussing