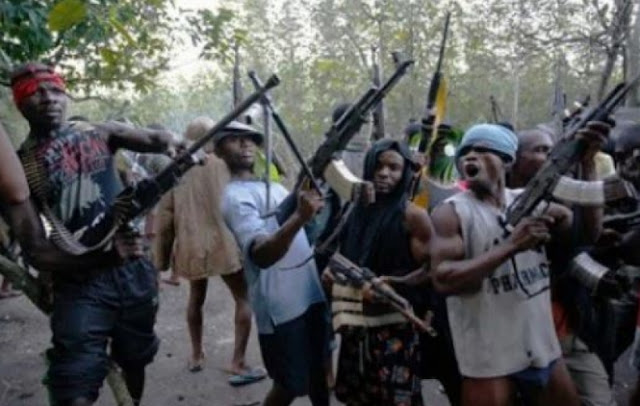 As at 1:00pm, sporadic gunshots are heard in the community, a resident, who craved anonymity told PM News.

The streets are deserted, while many remained indoor as the police and soldiers moved in this morning to try to salvage the situation, but the militants are said to be undeterred as they engaged the military in an intensive gun battle.

A Rapid Response Squad, RRS, source told PM News that the police were shielded inside an Armoured Personnel Carrier, APC, as they approached the retreating militants who engaged them in shootout.

Sources said the militants had also engaged the police and soldiers in gun battle around Imose and Totowu waterside.
A policeman attached to the Igando Police Station has been shot dead as stray bullets from the militants hit him, an unconfirmed source said.

Police Public Relations Officer, PPRO, Dolapo Badmos did not pick her calls when our reporter contacted her on phone.
Earlier in the morning, a resident at Ewedogbo community had sent a Save Our Soul, SOS, message to the police and the state government to quickly act as the militants were killing people.

“Please help us call emergency line right now, Ewedogbo area of Igando, LASU Road is on war, Niger Delta militant are killing people right now, no one can call or go out, I am eye witness, please, help us spread the information,” he said in an urgent whatsapp message around 8.00am on Tuesday.

According to him, the policemen who came to the area had run away as the militants had occupied everywhere.

“The police that came have run back, the militants have occupied everywhere right now in Ewedogbon. They just broke our house’s main gate right now,” he said.

A top police officer, who craved anonymity, said the police were aware of the invasion, saying that policemen had been drafted to the area to protect lives and properties.

He added that an Armoured Personnel Carrier, APC, had been stationed in the area. He said the police were on top of the situation, but could not confirm if there were casualties.