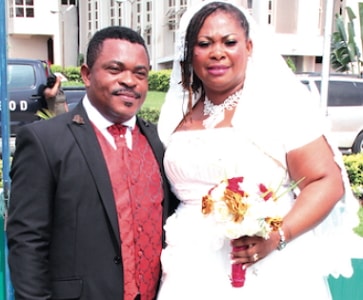 Nollywood actor Victor Osuagwu has finally revealed why he got married again 15 years after his traditional wedding ceremony.

In an exclusive chat with Gold Myne Correspondent, the actor explained why he had to wait for complete 15 years before he took his wife to the altar.

“I had the money to do my white wedding; I had done the traditional wedding years ago. But I told my wife that I would like my children to be on the bridal train on the day of our wedding. I wanted my last child to clock five-year-old before the wedding.

“Also, when we planned to have our white wedding earlier, her mother was a bit sick. I wanted the mother to be there because of my intimacy with her family members, but each time we planned it, the mother fell ill. When we eventually decided to do it and everything had been concluded, she died. I felt it was how God wanted it.”

According to him also, meeting his wife earlier in his life has made him a better person.

“I thank God I entered into a relationship very early in my life. I met my wife when I was about gaining admission into the university; she was still in secondary school then. Young and beautiful, I saw her as a better alternative to any girl on campus. I even took my wife to parties in school,” the comic actor narrated.