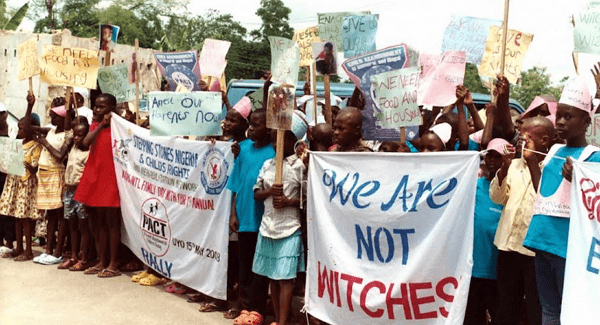 The problem of child abuse is a very serious one in Nigeria.

To the extent that, statistically speaking, over 30 million Nigerian kids are at risk of one form of abuse, ranging from the 10.5 million who are out of school, to the 2.1 million who are displaced by terror and are currently scattered across various Internally Displaced Persons (IDP) camps throughout the northern region, 11 million or so child destitute popularly known as Almajiris, to child brides, child labourers, street kids, child artisans, and now the depressing issue of child “witches” killings.

Although the book ‘The Memoir of a White Witch’, for which we are raising funds, contains some elements of fiction intended to make the it an interesting read and pit the story in perspective, it is originally based on real events, and it x-rays the issue of the extreme abuse of youngsters between the ages of 1 to 16 who are accused of witchcraft in some Southern Nigerian States.

The phrase “child witches” aptly describes the experiences of these kids who are victims of the worst form of violence. And they are represented by the likes of Israel, a 13-year-old slender boy with dark eyes, who went through a terrible ordeal at the hands of his cousins who tried to bury him alive “because of his witchcraft”

And sweet-tempered Jerry, a 9-year-old, whose knees, elbows and toothy grin showed severe battering when we met him. He was beaten by his pastor, starved, made to drink a concoction made from mixing cement and water as a way of proving his innocence, before his father tried to set him ablaze while the pastor’s wife cheered on. His survival remains a miracle till this day.

By far the most pathetic story is that of late Nwaeka, 16, who became mentally retarded before she died. The day we saw her, she was sitting on the bare mud floor, her eyes rolling, and scratching at her stick-thin arms. The other children at the CRARN orphanage where kids like her are catered for in Eket, Akwa Ibom State Nigeria, were surprisingly patient with her. The wound on her head where a three inches nail was driven appeared to be healing well when we saw her. Her family pastor had denounced her, and her family tortured her in a bid to make her confess, she died later.

Since 1999, because of the growth of a violent kind Pentecostalism, some churches, led by one Lady Apostle Helen Ukpabio and her likes, believe naming kids witches would somehow validate their spirituality, and so, over 15,000 children have been denounced by “faith healers” and displaced, abandoned, tortured and or even killed.

The belief in the concept of witchcraft is not new in this part of the world. It is defined as the practice of magic, i.e. black magic, which is explained to mean the use of spells and the invocation of spirits to cause harm and misfortune to others.

This definition is as broad as it is largely and grossly misunderstood by many Africans. As a matter of fact, the concept has taken on a new life recently, partly because of this rapid growth in evangelical Christianity, a thing that unscrupulous people in the guise of “men and women of God” have exploited, charging huge fees for exorcism or ‘deliverance’ from susceptible parents and guardians.

The Child Rights and Rehabilitation Network (CRARN) is a child rights advocacy NGO with a home in Eket, where it caters for abandoned and stigmatized kids. Having written a number of articles bothering on the subject of child abuse, especially as regards witchcraft accusations, I was invited to volunteer for CRARN by Mr Sam Itauma, the amiable founder of the NGO, a few years ago.

Although Nigeria already has a very poor record as regards the issue of child welfare, since joining CRARN, we have found an endless list of recorded and documented extreme cases of child abuse, and discovered also that the menace is seriously under reported by mainstream media.

This is despite the fact that there are countless articles, video documentaries and so on, which are available at just one click on the search engine Google, if one typed the phrase ‘child witches killings’.

It is true that some laws have been enacted by the government, it is also true that well-meaning Nigerians are beginning to rise up to the challenge, but this would be the first time a complete book that is based on first-hand account of victims will be written on the subject.

Apart from community volunteer work, I see writing as a calling. From articles to short stories, books to blog posts, I have contributed to two international anthologies, one in America in 2014, and the other in India in 2017 when I visited both countries. My short story about rape and teenage pregnancy, ‘That Sunday Afternoon’, won the maiden WordMaster Writers’ Challenge competition in May, 2015, and in the past few years I have written articles on child marriages, violence against kids and so on.

My books ‘Cold Black Night’, ‘The Edge of Patience’, and November 5, were all published in Ibadan, Oyo State, Nigeria, and all of them centre on issues affecting youngsters.

We believe the story of the suffering kids of southern Nigeria is worth telling, this is why we have embarked on a fund rising, not only to self-publish the book and make a short documentary in the subject, but also to raise money for the CRARN orphanage.

So this is a passionate for donations that would make the much needed difference in the lives of these kids and get the book into bookshelves and the documentary on the media worldwide.

We therefore appeal to everyone of good conscience who reads this, to assist in the quest to give the story of these endangered, yet remarkable kids, a permanent face and a voice visiting the links belows to donate and view the trailer.

Since 1999, child advocacy groups have documented cases of abuse of an estimated 15,000+ kids in some southern Nigerian states accused of witchcraft.

Please see link below to donate towards the production of a book and film about them.

Continue Reading
You may also like...
Related Topics:condemned, kids, nigeria