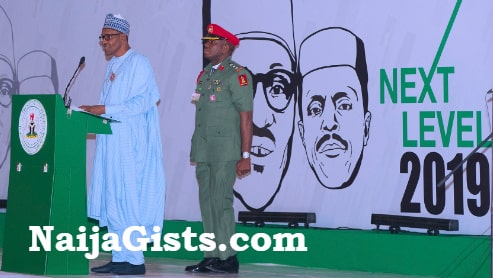 Nigeria Deserves Real Next Level, Not Just As Slogan

For the next few weeks, I am going to take this space to the next level by speaking above whispers on issues that I feel will help make this dispensation better and in the interest of Nigerians. I will x-ray policies and decisions from the last dispensation and give my take on what should be done about them in this dispensation.

The springboard for me would have been the presidential inauguration speech. Two days ago, President Muhammadu Buhari took the oath of office at the Eagle Square in Abuja. The ceremony began necessary having defeated Peoples Democratic Party (PDP) candidate and ex-Vice President Atiku Abubakar. Not a few attribute his success at the poll to his cult following in key areas of the country.

At the inauguration, Nigerians looked forward to an inauguration speech in which the president would spell out how he would arrest the insecurity in the land, how the biting poverty will be addressed and how his strict monetary policies will make things better for the people. But for reasons best known to the president, he refused to give an inauguration speech and thus dashed the hope of those expecting him to give a direction of what to expect in the next four years.

In the absence of an inaugural speech, I am turning to what perhaps is the ‘biggest’ achievement of the last dispensation: the full implementation of the Treasury Single Account (TSA) policy. The full implementation began in September 2015. This policy is an International Monetary Fund (IMF)-recommended cash management policy, which mandates all governmental funds to be managed in a single bank account or at the most a set of linked accounts.

The Dr Goodluck Jonathan administration had carried out a pilot scheme. The administration directed Ministries, Departments and Agencies (MDAs) to close all their accounts in commercial banks. The money was thereafter moved into a single account at the Central Bank of Nigeria (CBN). For the full implementation, on August 7, 2015, the President compelled MDAs to close their accounts with commercial banks and transfer their balances to the CBN on or before September 15 of that year. By this action, he gave life to this policy launched in 2012 but left unimplemented. This resulted in the consolidation of over 20,000 bank accounts. An average of N4.7 billion is saved monthly in banking charges.

The era of some MDAs having idle cash in banks and still borrowed exorbitantly from banks is gone for good.

So far, the national treasury has been saved over N8.9 trillion that would have gone as bank charges. Despite this, not a few still see the TSA as one of the ruses of the Buhari administration. If only they can ask the banks to give details of what they are losing to the TSA!

Good as the TSA is, a number of huge revenue generating MDAs are not fully complying with the policy. They have kept seeking total exemption from the policy, which I believe should never be granted.

The success of the TSA has attracted international and continental attention. A team from the Republic of the Gambia, which came to Nigeria for two weeks to understudy the process, just departed. Soon, The Gambia will replicate the scheme. The country’s Accountant-General and head of the delegation, Momodou Lamin Bah, said they came to Nigeria after the IMF cited Nigeria as a good example worth emulating.

During the visit, the team held discussion with major stakeholders, including SystemSpecs, the 27-year-old Nigerian firm, which in 2011 got the nod to drive the process. The bidding process involved the Nigeria Interbank Settlement System (NIBSS) and a Swedish technology company, known as CMA. I must point out that the Jonathan administration was sceptical of SystemSpecs and was bent on awarding the contract to CMA. It soon dawned on the administration that the CMA was not ready. NIBSS, which is owned by the CBN, was its next choice. It did not take long before it became clear to the administration that SystemSpecs should be saddled with the responsibility.

As with all new things, there have been a number of controversies around the TSA and SystemSpecs. A senator accused SystemSpecs of making billions of naira daily from its operation of the policy. Last year, the Federal Government announced its decision to renounce payment to SystemSpecs for driving the TSA. SystemSpecs was the subject of attacks. For me, if the Federal Government sees the needs to renegotiate with Systems Specs, all well and good. That is in line with due process. An indigenous company that has driven a process applauded home and abroad deserves fairness. It should not be given undue advantage, but it should not be treated unfairly for pecuniary reasons, such as refusal to grease the palms of corrupt government officials or lawbreakers masquerading as lawmakers.

Clearly, the TSA deserves to be transformed into a national project. It should be institutionalised and taken beyond the office of the Accountant General of the Federation and the TSA Director. I think the nation will benefit from this given the fact that this is almost like the only policy of this administration with global applause, which has attracted The Gambia, with the Kenyans and Ethiopians said to be on the way to understudy it.

My final take: The Federal Government should ensure that all MDAs and government ventures comply with the TSA for the growth and development of the country. Anything short of this is a disservice to this amazing policy, which has helped check graft in inestimable ways.

What will I turn to next week? Our love for all things foreign and how through this we are all killing our economy will receive due attention. Until then, I pray that this dispensation will not be anything like the last one. We deserve better security, better electricity, better education sector, better labour relations, and better health sector and better everything! We must truly have a real Next Level, not just as a slogan.

Continue Reading
You may also like...
Related Topics:Buhari, next level, slogan