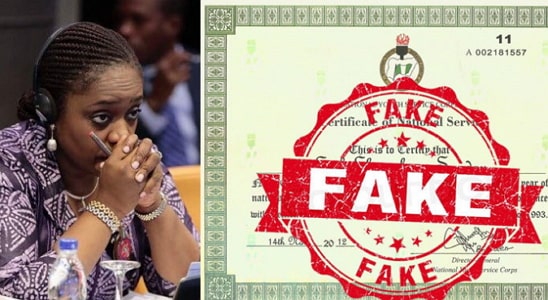 Her resignation came after she was accused of presenting fake NYSC certificate of exemption from the National Youth Service Corps.

Adeosun who resigned on Friday in a letter to the Presidency explained how she got to know that the COE she got from the NYSC is not genuine.

Her letter read in part;

“Let me commence by thanking you profusely for the honour and privilege of serving under your inspirational leadership.

“It has been a truly rewarding experience to learn from you and to observe at close quarters your integrity and sense of duty.

“I have, today, become privy to the findings of the investigation into the allegation made in an online medium that the Certificate of Exemption from the National Youth Service Corps that I had presented was not genuine.

“This has come as a shock to me and I believe that in line with this administration’s focus on integrity, I must do the honourable thing and resign.

“Your Excellency, kindly permit me to outline some of the background to this matter.

“I was born and raised in the United Kingdom, indeed my parental family home remains in London. My visits to Nigeria up until the age of 34 were holidays, with visa obtained in my UK passport.

“I obtained my first Nigerian passport at the age of 34 and when I relocated, there was debate as to whether the NYSC law applied to me. Upon enquiry as to my status relating to the NYSC, I was informed that due to my residency history and having exceeded the age of 30, I was exempted from the requirement to serve. Until recent events, that remained my understanding.

“On the basis of that advice and with the guidance and assistance of those I thought were trusted associates, the NYSC was approached for documentary proof of status. I then received the certificate in question. Having never worked in the NYSC, visited the premises, been privy to nor familiar with their operations, I had no reason to suspect that the certificate was anything but genuine.

“Indeed, I presented that certificate at the 2011 Ogun State House of Assembly and in 2015 for the Department of State Services clearance, as well as to the National Assembly for screening. Be that as it may, as someone totally committed to a culture of probity and accountability I have decided to resign with effect from Friday, September 14, 2018.”

“Your Excellency, let me conclude by commending your patience and support during the long search for the truth in this matter.

“I thank you again for giving me the honour of serving under your leadership, it is a rare privilege, which I do not take for granted.

“As a Nigerian and committed progressive, I appreciate you for your dogged commitment to improving this nation.”

“Your Excellency, It has been an exceptional privilege to have served our nation under your leadership and to have played a role in steering our economy at a very challenging time. I am proud that Nigeria has brought discipline into its finances, has identified and is pursuing a path to long-term sustainable growth that will unlock the potential in this great economy.

“Under your leadership, Nigeria was able to exit recession and has now started to lay the foundation for lasting growth and wealth creation. Repositioning this huge economy is not a short-term task and there are no shortcuts, indeed there are tough decisions still to be made but I have no doubt that your focus on infrastructural investment, revenue mobilisation and value for money in public expenditure will deliver growth, wealth and opportunity for all Nigerians.

“I thank His Excellency, the Vice-President and my colleagues in the Federal Executive Council for the huge pleasure and honour of working with them. I also thank most specially, the team in the ‘Finance Family’ of advisers and heads of agencies under the Ministry of Finance. Your Excellency, this group of committed Nigerians represents a range of backgrounds, ethnicities and ages.

“They have worked well above and beyond the call of duty to support me in the tasks assigned. The diversity in my team and their ability to work cohesively to deliver reforms, convinces me that Nigeria has the human capital required to succeed.”

Adeosun was appointed by Buhari in November 2015. Before her appointment, she worked as an Accounting Assistant at the British Telecom Company, London from 1989 to 1990 and Senior Audit Officer at Goodman Jones, London from 1996 to 2000.

There were media reports in July 2018 that Adeosun did not participate in the one-year national youth service, but allegedly forged an exemption certificate several years after her graduation.

It was reported that the certificate, which was dated September 2009, was reportedly signed by an NYSC Director-General, Yusuf Bomoi, who had left the scheme in January 2009.