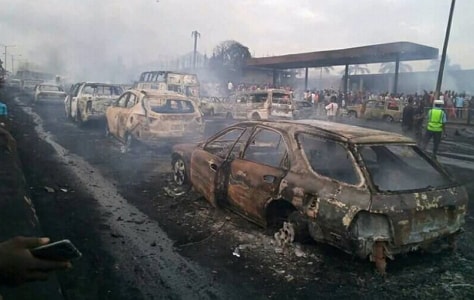 Whilst we are still on the issue of how unmerited wealth under-develops a nation, it is meet to comment on the events of last Thursday when Dante’s Inferno visited Lagos. It was a scene out some horror film; an apocalyptic nightmare. Where were you on Black Thursday? Yours sincerely was caught in the combustible cauldron of fumes and human fulmination finally making it home on foot at ten in the night having left Lagos for Alausa at 4pm. NG

This kind of horror is unthinkable in India, in the Asian tigers and the developed nations of the world. Nigeria is becoming one vast abattoir. This is the time we need to be frank with ourselves. There are two ways of looking at the Thursday tragedy. First, it is a failure of official policy. In civilized countries, the bulk of petroleum products and other inflammable materials are not transported by road. It is a sure recipe for demographic disaster. Those who cannibalized the national shipping Line and the old Nigerian Railway Company have the blood of innocent Nigerians on their head.

Second, this is a failure of infrastructure and national capacity-building. The Lagos-Ibadan Expressway, the principal arterial route out of the major port and economic capital of the nation, opened to traffic over forty years ago. Since then the population of Lagos and the number of vehicles plying this route have quadrupled.

Nobody has thought of alternative express routes out of the besieged megalopolis or a Tankers’ beltway at the very least. Meanwhile, the secondary routes leading out of Lagos have been abandoned. With the obvious failure of regional integration staring us in the face, individual states can only do so much.

But even in this pervasive adversity, we must thank the almighty for small mercies. Justifying the huge outlay the Akin Ambode administration has expended on local security and traffic emergency, the Lagos State Rapid Response Squad swung into immediate action. This is not a question of hearsay as yours sincerely was trapped for hours.

Amidst the noxious fumes of roasting flesh and burning carcasses of vehicles, these people were at it, re-routing and redirecting traffic, on foot, in special motor cycles and in cars even as they firmly sealed off the locus of disaster. Their stern presence and prompt attention of police also prevented criminality and delinquency.

We must also commend the basic humanity and decency of the average Nigerian wayfarers. As soon as disaster struck, their concern and generosity of spirit kicked in with several commuters in cars, buses, motorcycles and on foot phoning other commuters and communicating alternative routes away from the inferno. While still trapped in the car, yours sincerely received distraught calls from all over the world as selfies of the carnage went viral. It was learnt that concerned residents of adjoining estates quickly mobilized their denizens for emergency evacuation.

May the soul of the departed rest in peace.

Continue Reading
You may also like...
Related Topics:abattoir, nigeria